For the Tour Championship, Colussus chose the following lineup to be the highest scoring. 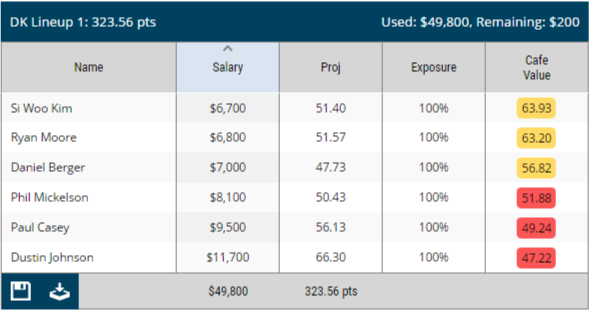 Dustin Johnson: DJ retook the Fed Ex Cup lead with his victory at the BMW Championship and now controls his own destiny. In many ways it is surprising that DJ has not won a Fed Ex Cup, but considering the recent champions, it is in no way an indictment on his play. He cruised through the BMW Championship and showcased his classic power game, but it was his touch around and on the greens that showed what a dominant force he can be when he is on. He has two 5th place finishes at East Lake in the last three years, and another one might just be good enough for him to win his first Fed Ex Cup. He is the most expensive player this week, and also owns the highest salary gap between he and Rory McIlroy ($11,700 to Rory's $11,100). DJ is a no-brainer at the top of your lineups and serves as the perfect anchor in GPP's.

Paul Casey: Casey has turned it on at the right time, finishing solo 2nd in the last two Fed Ex Cup events (BMW and Duetsche Bank). He has been incredible from tee to green and has the exact type of game to be successful at East Lake. As with the rest of the top five players in the Fed Ex Cup standings, a win at East Lake would mean a Fed Ex Cup Championship for Casey and a career defining moment. For a player who has never won a major, and never really won a tournament of significance, which is a shame considering his talent, Casey has a chance to silence the vast amount of critics who have pined about him never fully reaching his potential. The way he is playing right, he is a bargain at $9500 and a great GPP play this week.

Phil Mickelson: You can never really count out Lefty, which he proved this year at the British Open by keeping pace with Henrik Stenson through his record breaking performance. Mickelson has not really played his best golf of late, but still comes into East Lake with six top 5's on the season. Mickelson has proved throughout his career that he is never more dangerous then he is at places where has won in the past, and that goes doubly for East Lake. He owns two wins at the Fed Ex Cup finale, and should be considered an outside favorite, but one that would not surprise anyone. I like his price a lot this week with Mickelson providing salary relief and the upside to swing GPP's in your favor.

Daniel Berger: Berger comes into the Fed Ex Finale sitting in 26 place in the standings, but he has played very well over the last two weeks to get himself inside the top 30 and a chance at a career large payday. He finished 12th at East Lake in 2015, and has a very soft price of $7000. There are other options around him that may have higher upside this week in terms of placing, but none that I can see that match his scoring + finishing potential. Get him in your GPP lineups.

Ryan Moore: Moore closed out his season in strong fashion notching his 5th career victory, and third consecutive season with a win, not an easy feat on today's PGA Tour. He comes into the week sitting 14th in the Fed Ex Cup standings, and has an outside chance of winning the entire Cup if he were to win this week at East Lake. It wouldn't be completely foreign territory for Moore, as he finished 3rd at East Lake in 2012. You really can't go wrong with Moore in your GPP lineups, as just like Berger, his price is super soft at $6800.

Si Woo Kim: Kim comes into the Fed Ex finale sitting 18th in the standings, however, he has already put the cap on a dream season by winning the Wyndham Championship and earning close to $3 million in prize money. He's played extremely well in the final quarter of the season and that has continued throughout the Fed Ex Cup playoffs, with Kim notching top 20's in his last two events. He has proven to not fear the big moment, and that is one of the biggest reasons why he is a huge wild card this week. If he came into the final round with the lead, I would feel very comfortable knowing that he was playing to win. I like the overall composition of the Perfect Lineup this week, but Kim tops it off with a super soft price tag of $6700.