For the Travelers Championship, Colussus chose the following lineup to be the highest scoring. 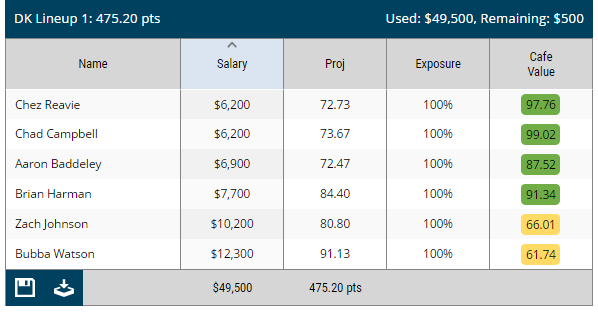 Bubba Watson: Watson is a layup this week, and the one guy I think you need to have in your GPP lineups. The Travelers was the site of Bubba's first win as a professional and he remarked at a PGA Championship press conference how much the tournament means to him, and how much it has done for his career. Considering this is a Tier-B event on the schedule, with relatively little competition at the top for Bubba, I am fully expecting a top 3 finish with a great chance at a win.

Zach Johnson: Zach is priced a little higher than he has been at many points this year, but he's actually a bargain when you consider the level of talent in the field this week. Hes won his fair share of tournaments on Tour, including two majors, and his win % is among the top players in the field this week. TPC Hartford is a short track which caters to his specific skillset, so there is very little doubt in my mind that he will return value on his salary this week.

Brian Harman: Another player who fits the mold for TPC Hartford. He's a short-ball specialists with a solid short game and is much more talented than he is given credit for. He's had some good results in years past and I would expect another made-cut, with the potential for a top 20. He's a great player to have in your lineups with Zach and Bubba this week.

Aaron Baddeley: Baddeley is an interesting play this week. He's coming off one of the best stretches of his career, with a 12th at the Quicken, a win (1st) at the Barbasol and 49th at the PGA Championship. Baddeley is one of the best putters on tour and his game matches up very well with the skills needed to succeed at TPC Hartford.

Chad Campbell: Campbell has been a favorite of Colossus, and with good reason. He's coming off six consecutive made cuts, all top 35's, and two top 12's. He's making just about 66% of his cuts, and has three top 10's on the year. Campbell is a ball-striker du-jour, and that skillset fits well on a course where made fairways and birdie opportunities generally equal a high percentage of birdies yielded. At $6200, Campbell is one of the best values on the board.

Chez Reavie: After two top 10's through the middle of the season, Reavie went on a bit of a down swing the last two months but has since rebounded with two consecutive made cuts and most recently a 14th at the RBC Canadian Open. If you look at the field from the top to bottom, after the top two guys, it is pretty wide open. Reavie is the type of player who bombards fairways, and depends on a solid game to give him birdie opportunities and save par through his short game.

Of all the lineups we've put together through Colossus this season, this is by far my favorite. In my opinion, lineup construction strategy this week should revolve around Studs and Duds, and this is as good as I've put together thus far.