For the Wells Fargo, Colussus chose the following lineup to be the highest scoring. 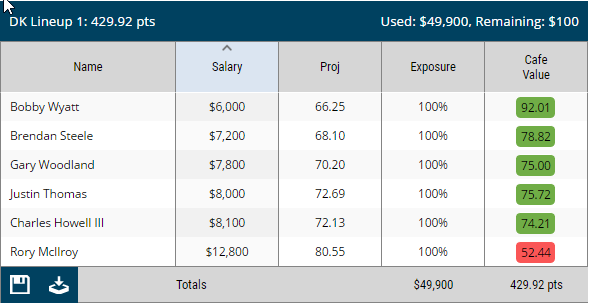 Rory McIlroy: With Dustin Johnson's withdrawal from the event today, Colussus leans towards using McIlroy, which I support. He's going to cost you a high percentage of your salary cap, but considering his win % and his previous course history, which includes multiple wins and five top 10's in six appearances, McIlroy is the clear choice at the top of your lineup. His hefty price means soft pricing otherwise, but this is a tournament where consistent success is hard to come by.

Charles Howell III: When you use McIlroy at the top of your lineup, it becomes difficult to balance the rest of your team, so it makes sense to pair him with consistent cut makers. Howell III is exactly the type of player that fits that bill, and it's hard to argue with his results this season. He's not going to win the tournament, and that's not something I like to say about my second highest salary, but there is precedent to this type of lineup construction.

Justin Thomas: Thomas is a guy I feel confident with, especially when your getting him at $8000, a very soft salary for a guy who's shown superstar qualities in his first two seasons on tour. Thomas has survived 11 of 13 cuts this year, which includes a win earlier this season. He hasn't broken 71 in any of his last four final rounds, but as long as he survives the cut and can land in the top 25, you've done well at his price point.

Gary Woodland: Continuing the trend of cut-makers, Woodland lands in a good spot this week. He's survived 10 of 11 cuts, and fits in line with the rest of the team we are putting together. His game also matches up very well with Quail Hollow's setup. His driving distance and consistent ball-striking will benefit him at a course that just resurfaced their greens with Mini-Verde Bermuda turf.

Brendan Steele: Steele is a solid choice at 7200, although there are some other guys in that price range that I am considering, namely Ryan Moore and David Lingmerth. With that said, Steele fits in nicely with the other players, having survived 9 of 13 cuts. He's also coming off a 13th in his last start at the Valero. Steele is a steady player, but my concern is whether he has the fire power to contend if the course plays anything like it did last year, which is expected.

Bobby Wyatt: This pick is guilty of a small sample size, but it is also consistent with the type of player you will need to take a shot on if you want to include McIlroy in your lineup. I'd rather take the quartet of Howell, Thomas, Woodland and Steele (with Wyatt), as opposed to taking a higher salaried player as my #2, and then have to take more than one shot on a very low salaried player. Wyatt showed his potential last week, finishing 4th in difficult conditions at the Zurich. He's enjoyed a fantastic amateur career and will have a ton of confidence heading into the Wells Fargo this week.