For the Wyndham Championship, Colussus chose the following lineup to be the highest scoring. 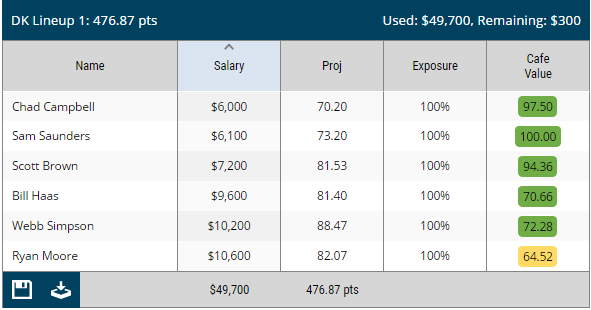 Ryan Moore: Fresh off his win at the John Deere Classic, Moore looks primed to continue his quest towards the top 25 Fed Ex Cup Rankings, and eventually a chance to play in the Tour Championship. With his win, Moore moved up to #23 on the Fed Ex Cup list, which will give him some breathing room and allow him to play the controlled type of golf that he did this past week. Moore is an accurate driver, excellent ball-striker and his short game is vastly underrated. His skillset fits in very well at Sedgefield CC, and I would expect a top 10 out of him this week at his price point. His current form has been noted, and his course history is excellent as well. As a former winner of the Wyndham (2009), and most recently, a top 10 last year, Moore feels like as close to a bargain as you can get this week at $10,600.

Webb Simpson: Speaking of course history, Webb Simpson has owned the Wyndham throughout his career. He won in 2011, and has followed that up with four top tens, an 11th place and a 22nd. As PGATour.com noted, his scoring average is 66.67 over his last 24 rounds at Sedgefield. He has yet to reaffirm his status as a top player in the world after winning the US Open, and there were times when many of us wondered whether he would ever be able to recover after ditching the long putter. He's flashing some game as of late, finishing with top 15's in four of his last seven starts.

Bill Haas: Another Wake Forest grad, Haas has played very well at Sedgfield over the years, totaling four top 10's and a top 20 since 2009. Haas excels on courses where he can rely on his ball-striking, and Sedgefield fits that bill to a tee. The good vibes that Haas has at this course stems from the fact that he shot his career low round here in 2009 by finishing the tournament off with a 62. Haas has been notoriously up and down in his career, but if you can catch him on the right week, he offers high upside at a fair price, and his ownership rates always tend to be lower then expected.

Scott Brown: At $7200, Brown looks to be one of the better values on the board this week. He's played well for much of the season before missing five of six cuts in mid summer. He's since rebounded with a 25th at the Travelers, and followed that up with a 16th at the John Deere. Brown's results this year have been hit or miss, but right now he is playing well and should have great vibes coming into this week. He finished 3rd last year, which is impressive, but even more so when you consider that he was paired with Tiger Woods for the final round. The 7000-8000 tier is an important one this week with both studs/duds and balanced lineups.

Sam Saunders: The grandson of Arnold Palmer, Sam Saunders has carved out a career on Tour on his own merits...but he has yet to really break through with a win. Last year at Sedgefield, Saunders played inspired golf, firing rounds of 65-69-69-65 en-rroute to a T14 finish. If DFS players remember last years Wyndham Championship, they will recall Saunders being the difference maker, and the one who separated the top two from the rest of the pack. In 2016, Saunders started off about as bad as you can, missing eight of his first nine cuts, and totaling eight made cuts on 22 tournaments played. When he has made the cut, and not been subject to the third round cut rule (three times in 2016), Saunders has had some noteworthy finishes. An 8th at the Barbasol, 21st at the Quicken Loans and a 14th at the Honda Classic. For what it's worth, Saunders seems to excel on courses that are birdie-fests, and despite missing the cut last week, he did fire a 2nd round 65 to miss the cut on the number and at least exit the state of Illinois with some positive vibes heading into this week. At $6100, hes a nice GPP flier and a risk worth taking.

Chad Campbell: I swear I'm not rigging Colossus to ensure that Campbell appears here every week. It just seems like he's had a good enough career where he has solid results at most venues, and his statistics are always better than most of his counterparts in his price range. He's 51st in SG: Overall, 47th in Driving Accuracy, 49th in Scoring Average, 34th SG: Tee to Green, 20th SG: Around the Green and 53rd in GIR%. He has three top 10's and excels on courses that play to his strength as a ball-striker, which Sedgefield definitely does. He finished 31st here last year, and at $6000 is a surefire GPP play that could pay off in a big way.