For the Zurich Classic, Colussus chose the following lineup to be the highest scoring. 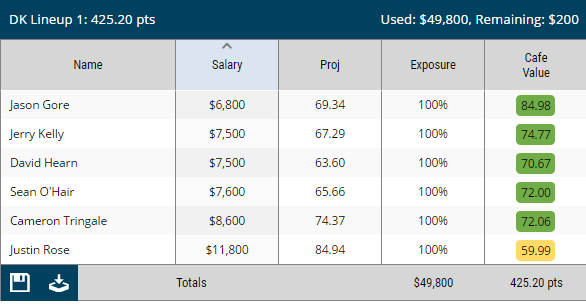 Justin Rose: There are several players at the top that can be viable candidates to lead your team this week, but PP$ wise, Justin Rose makes the most sense to me. Rose is a former champion at the Zurich, and has played The TPC of Louisiana very well each time he has competed there. Over the last four years, Rose has finished no worse than T15, including a win. He will cost you nearly 24% of your salary this week, but he is more than worth it with the continued success of ballstrikers at the Zurich.

Cameron Tringale: Tringale has survived three consecutive cuts, although he doesn't have much to show for it with only one top 30 among those cuts made. What makes him a good choice this week is his course history previously at the TPC. Tringle is coming off a 2nd place in 2015, 17th in 2014, 7th in 2012 and 18th in 2011. He has the skillset that generally succeeds at the Zurich and is priced very fairly at $8600.

Sean O'Hair: Another player who lives and dies by his ballstriking, O'Hair is an interesting pick this week. He's had some moderate success at the Zurich, including surviving three consecutive cuts which includes a 12th place in 2015. His current form is inconsistent, having missed the cut last week before putting up a 10th place the week before that. O'Hair has always been a very talented player on the cusp of stardom, but he has yet to put together the type of week in-week out performances needed to ascend to the highest levels of the PGA Tour. He makes for a solid GPP pick this week.

David Hearn: Hearn represents one of the better values this week. He's priced generously at $7500, and has survived five consecutive cuts at The Zurich, including a 6th place finish in 2015 and two other top 25's in his last five tries at the TPC. He's coming off a T13 last week in San Antonio, where he showed off his impressive ballstriking skills by finishing 4th in proximity to the hole. Those skills are what he will need to call on in order to see success this week, but there's nothing to suggest otherwise. He's one of my favorite GPP plays of the week and I will have heavy exposure to him this week.

Jerry Kelly: Do you see a trend developing? Colussus has picked up on both the current form and previous course history of the mid-tier of ball-strikers and Kelly is no different. He is a former champion at the TPC and that never hurts, but I would have liked to see him be a bit more consistent making the cut, as he's missed two of his last four cuts at the Zurich. The course sets up very well for him while neutralizing some of his deficiencies, specifically the yardage he gives up off the tee. At $7500, he makes for a nice play this week with significant upside, although he also has the downside to miss the cut. In other words, a nice GPP play in a week where there are not many guys priced accordingly.

Jason Gore: Gore was our pick in the bottom tier last week, and he did well by us by making the cut and finishing 37th. He doesn't have much course history at the TPC, but he played very well in 2015 en route to a 12th place finish. Gore is a mixed bag, so it's hard to say exactly what you are going to get from him in any given week. With that said, he has shown the requisite upside to put in play in GPP's, and considering his skillset is that of a solid ballstriker, he matches up well with the course setup this week. You can do a lot worse at $6800.

I love the breakdown you give on this each week. Really helps a newbie to golf like myself when using all of our wonderful tools