There are plenty of millionaire-maker tournaments between all the sports, but DraftKings and PGA have been rolling out some monster tournaments. Over August 19-22, DraftKings will be running a $4M Guaranteed Prize Pool Tournament. There will be 250 final competitors, which all will be paid out, but there is a twist as you need to still finish within the top 40 to make the championship over the two previous weekends. DraftKings users will have the chance to qualify over various tournaments leading up to the championship. Winning this contest would also qualify you to be a part of the DraftKings Championship Series.

For users that have qualified, there are a few different aspects to this World Championship, where other sports you qualify and are automatically in the big dance. This one there is a Playdown Round 1, where the 250 qualifiers play on August 5th-8th and the top 100 will move onto the next weekend, which is August 12-15. The top 40 after that will compete for the top prize and title.

The St. Jude Invitational, Wyndham Championship, and Northern Trust are the three tournaments that spread across the timeline for the PGA World Championship.

If you do not make the cut for the final day, but did qualify for the top 250, you will still finish with a cash prize. As seen above, the last place prizes are still a whopping $2,500. But of course, each advancement users make within the rounds will bring an increase in prizes.

The top prize is $1,000,000 but also a ticket to the Tournament of Champions, which is a massive tournament in 2022. You can find more details here. It is going to be a big year for some folks as they will have a chance to make $1M and then qualify for even more. 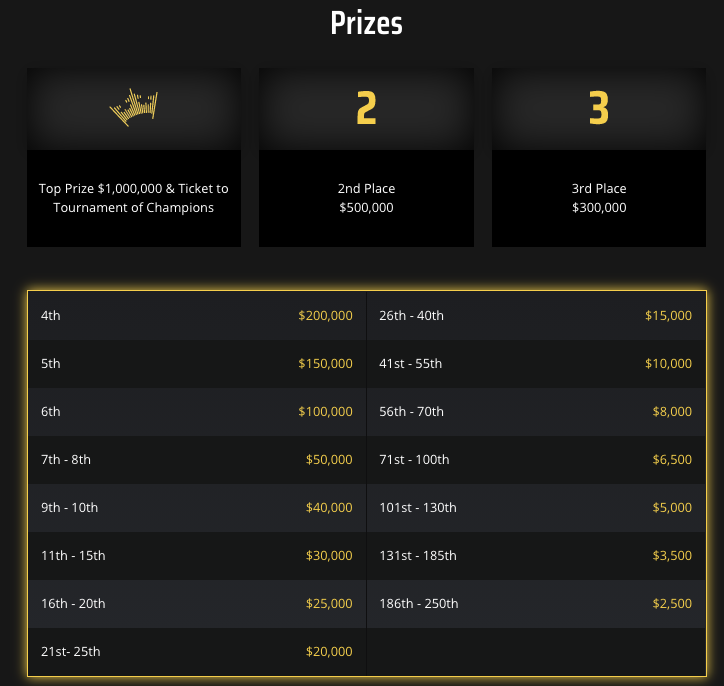 How DFS PGA Is Played

For those who are new to PGA DFS, the roster is made up of six golfers with a total of $50,000 money to spend. Every player has a salary tied, where you need to stay under the budget. Getting golfers over the cut is a must for finishing atop one of these qualifiers.

Qualifiers are a different approach compared to cash games. You are aiming for a top finish to beat out an entire field, compared to other tournaments where you might be looking to finish within the top 20-40%. That requires making sure you are different from the field, especially with only a lineup of six golfers. Finding a balance of players with a high ceiling and lower ownership is a plus for taking down qualifiers. Every qualifier only has the qualifying ticket as its first-place prize.