The historic Glen Abbey Golf Club plays host to the RBC Canadian Open this week, marking the 27th time it was chosen to represent the Canadian Open. It is the third longest running tournament in PGA history, dating all the way back to 1904, when John H. Oke won the inaugural edition. The Canadian Open is part of the Triple Crown of National Golf Tournaments, along with the US and British Opens.

Glen Abbey was designed in 1977 by Jack Nicklaus, which turned out to be his first (and some say best) solo golf course design. The tournament will stretch the tees out to 7,273 yards, which is a little less than the average length of a PGA tournament. The course will yield its fair share of birdies; the last three winners at Glen Abbey finished (-17), (-17) and (-18). Also consider this, while starting on the back nine, Mark Calcavecchia the set the PGA record for consecutive birdies (nine), birdieing holes 12,13,14,15,16,17,18, 1 and 2. It is a record that still stands today.

Looking at some of the past winners, it is pretty clear that ball-striking and putting are the two most important categories to focus your research on. Jim Furyk won back-to-back times in 2006 and 2007 while also finishing second last year. The past four winners are Tim Clark, Brandt Snedeker, Scott Piercy and Sean O'Hair. There are no real bombers in that group. They are all solid ball strikers, and in the case of Snedeker and Clark, excellent putters.

The lush fairways and greens, rolling hills and elevation changes make Glen Abbey a fantastic spectator course. The gem of the course is the stretch of “Valley Holes" (holes 11-15), that starts out with a giant 100 ft. elevation drop from the tee out onto a vast fairway. This is also where the “16 Mile River" enters the course from seemingly nowhere, and stands guard in front of the 13th green. At 558 yards, the 13th hole is a true risk-reward Par 5. If you can hit two great shots, they are rewarded with an eagle putt. If you miss the long approach, you are staring at a wet ball, and most likely a tough bogey. Check out the photos below as I dive into some stats that will help us predict who can take advantage of this incredible stretch of holes. 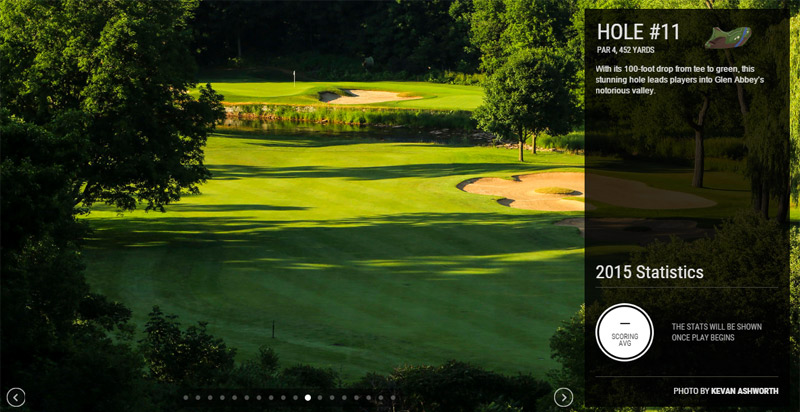 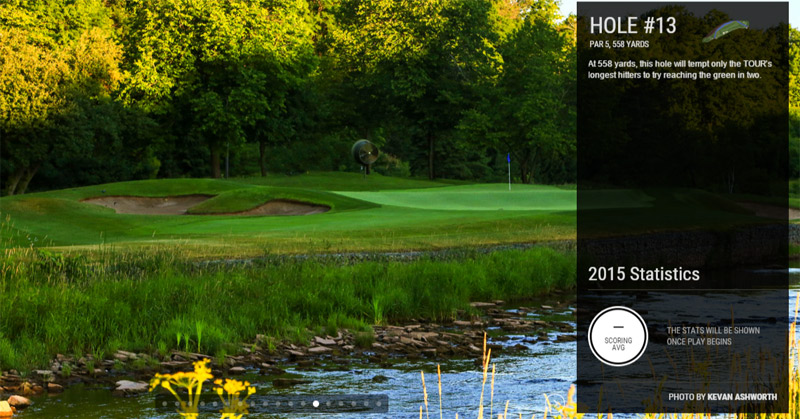 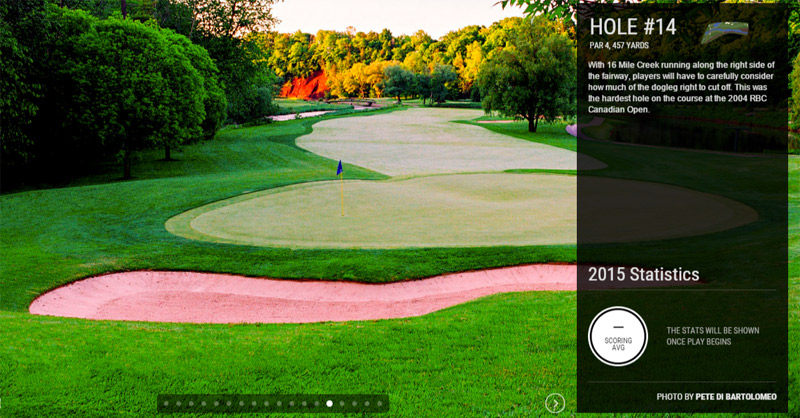 When it comes to birdie-fests, they are usually called putting contests for a reason. However on this stretch of holes, every birdie opportunity must be carefully set up with a strategic drive to a point that opens up the best angle to the hole. Some very good putters have won this tournament, but looking a little deeper, they are also some of the most accurate drivers of the golf ball.

Furyk is no stranger to the Canadian Open, having won back to back tournaments in 06' and 07', as well as racking up a second place last year. His blend of driving accuracy and incredible ball striking suits Glen Abbey very well.

This is not a tournament that rewards the safe play. There are going to be guys throwing up 64s and 65s every day, and in this instance, Bubba is just the man for the job. Flat out, he has a gear that no one in the field can match. His driving accuracy is a concern, but Bubba can hit 3 wood or hybrid off the tee and set up his approach shots without sacrificing distance to the field. There is not much course history to go on, but it is impossible to not include Bubba in a birdie-fest.

Piercy is a horse for the course, having won the Canadian Open in 2012. During that tournament, Piercy opened with a 62. While his stats are not incredible, he has a solid all-around game and can go low with the best of them. After his win last week, I will be rolling with Piercy. He is one of those guys that you have to ride the wave, and this week is not the week you want to jump off.

Swafford is another guy who is flying under the radar each week. His biggest problem is that his really low rounds have come when he is seemingly out of contention, making his stats and results somewhat unreliable. With that said, you cannot ignore a guy who strikes his irons as well as Swafford does. Ninth in total driving gives me some more confidence in him, as this is a course where you really need to set up your approach with an accurate drive. At ($6800) on DraftKings, Swafford represents an excellent value pick

12th in Total Putting, 47th in Greens in Regulation.

Ball Striker Du Jour, Palmer should be very comfortable at Glenn Abbey. He has the length to turn the Par 5s into eagle opportunities, ranking 30th on tour in Going for the Green, succeeding 25% of the time. He sits 47th in Greens in Regulation and 12th in total putting. Glenn Abbey will yield birdies, there is no question about that. Palmer fairs very well when the tournaments become birdie-fests, including these results from earlier this year: 17th at Sony Open (-10), 10th at the Humana Challenge (-19) and second at the Phoenix Open (-14). Palmer hasn't won a tournament since 2010, but considering the somewhat weak field, he has a real chance to break that streak this week.