DraftKings wants to find the best fantasy hockey player in the world. To get a chance at a half-a-million dollars in prizes, you need to prove your fantasy hockey knowledge. Throughout the NHL regular season, you'll have dozens of chances to do just that.

Every hockey fan's goal is to skate their way into the DraftKings Fantasy Hockey World Championship FHWC live final to be held in Nashville, Tennessee. Here's what you need to know to punch your ticket to Music City and a chance to be king of the fantasy hockey world.

You're going to have to earn a spot at the finals in Nashville. However, DraftKings is giving a season-long schedule of qualifying contests to get there. In each of the regular season qualifiers, one fantasy hockey lineup will win a ticket to the FHWC.

Some satellite rounds will have different entry fees. These will also pay out various cash prizes for those finishers below the high score. Qualifiers are as low as a quarter and as much as a $300 entry fee.

However, the focus of every lineup should be on that ticket. Win one of those and you're in line for huge cash. There is a limit of three entry tickets to the FHWC in Nashville. You can still enter any of DraftKings qualifying contests.

But, if you net the most fantasy points for that contest, the ticket will be awarded to the second highest point total. You will still get any cash prizes you win during qualifiers posted to your account. So, play as many qualifiers as you wish, targeting those three FHWC finals awards.

The big prizes are going to be handed out with a little old-fashioned southern charm. Of course, during the season-long qualifying period, all eyes will be on the top prize; the trips to Nashville.

Once the cast of fantasy hockey superstars is set, there will a guaranteed $500,000 prize pool to the finalists. A check for $100,000 will be handed to the person who posts the highest score in Nashville. 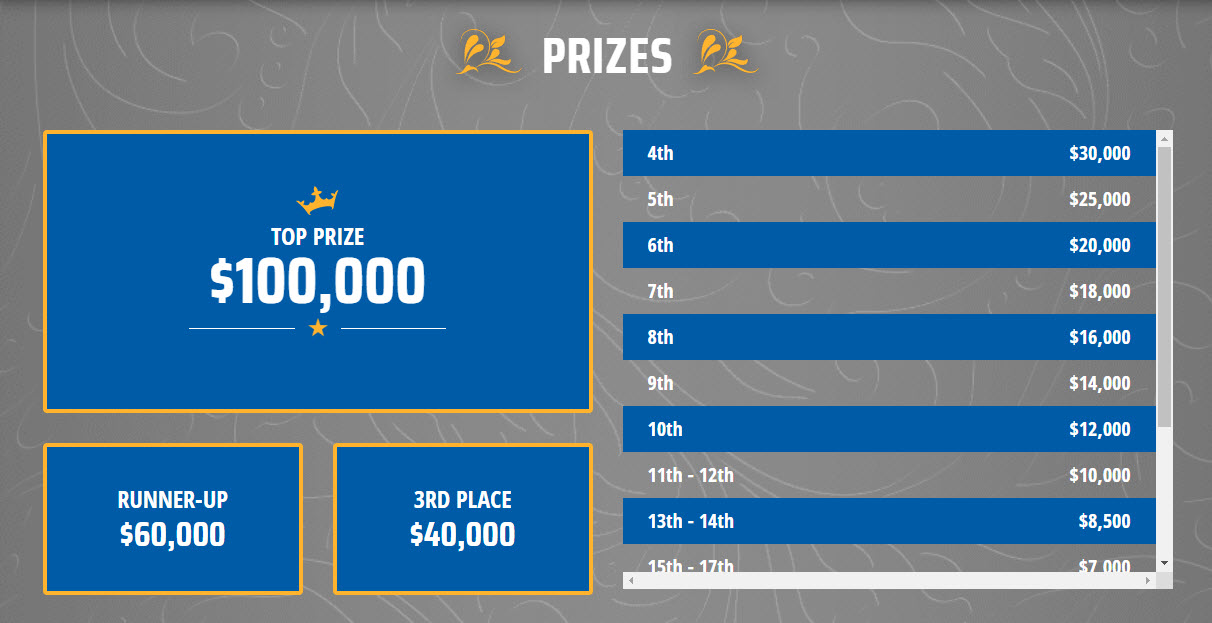 Of course, the biggest prizes for those who qualify is a chance at 100-grand. However, each qualifier will get spending cash, plus accommodations for 4 days and 3 nights in Music City courtesy of DraftKings. There will be some cool perks during the fun-filled weekend in Nashville.

Every satellite you play for a chance at the FHWC will use the normal DraftKings hockey scoring system. The key is to blend the right number of goals scored with a goalie that scores well guarding the nets.

While you need to have a balanced lineup that falls under the salary cap, a strong goalie performance is important. You lineup card will have the standard position players, wings, centers, defensemen, and of course your best goalie.

There is also one utility spot you can fill with any position except a goalie. Points are awarded according the classic DraftKings hockey format. The salary cap is the same in FHWC qualifiers as it is in other classic hockey scoring contests as well.

The average is $5,555 salary allotment per position. You can use the total $50,000 however you wish. But, remember the importance of, and the higher salary cost of the goalie, when building your lineup.

How your players score points isn't what's important. What matters is who nets the highest fantasy point total in the qualifying rounds. That fantasy hockey player will be punching his or her ticket to an extravaganza in the Music City Capital of the World.

In Nashville, Tennessee, they'll be playing for the title of the best fantasy hockey player in the world. The person who earns that honor will also get a sweet paycheck for their efforts. The only way to get to Nashville is to skate out onto the proverbial fantasy hockey rink and earn it. There are 40 spots to be filled, and one of them will win $100,000.