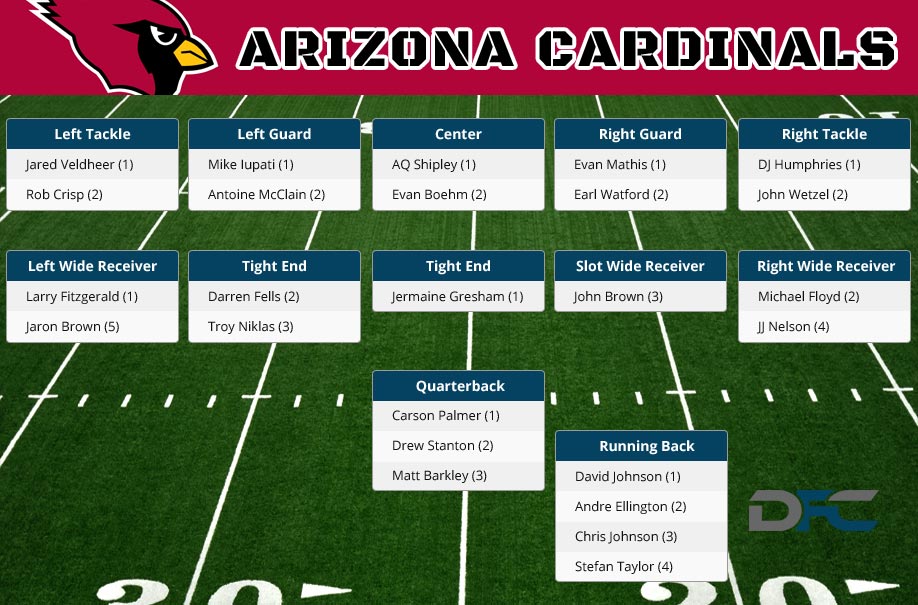 The Cardinals are coming of a very strong offensive season where Carson Palmer stayed upright and their third receiver (John Brown) and rookie running back (David Johnson) had breakout seasons. Coming into this year, expectations are high, as they should be.

In terms of offseason additions, they mostly focused on keeping some trusted veterans. They re-signed running back Chris Johnson and brought back veteran tight end Jermaine Gresham. Both are purely depth and role players on this team, and likely won't become big fantasy factors unless starters get hurt.

Carson Palmer is solidified as the top passing option in 2016, and Cardinals fans are better off not thinking about alternatives if he goes down. The last time Palmer got hurt, the Cardinals offense was swallowed up by tough NFC west defenses and lackluster quarterback play. This stunted the entire offense, and is something to been keenly aware of if drafting Palmer or any Cardinals. If he goes down, they're in big trouble. However, while he has been 'injury-prone' in the past, he was healthy all last year and has seemingly put those concerns behind him.

At running back, there were some murmurs early in the offseason that Chris Johnson may end up splitting carries with David Johnson, but that was right after Johnson was signed, and likely just offseason talk. Looking at things as a logical observer, it would be expected that DAVID Johnson gets the lion-share of the touches, in both the passing and running game, and is potentially allowed to become a workhorse. The second year runner displayed immense potential in a relatively small sample in 2015, and is a good bet for 200 plus carries in 2016. Beyond Chris Johnson, Andre Ellington still sits on the depth chart. What has seemingly been a quick and painful fall from grace from what was a promising start to his career, Ellington still has potential if called upon.

The Cardinals boast what is arguably the top trio in the NFL, and are one of the few teams in the NFL that have a reasonable shot at three players going above one thousand receiving yards. Of course, this is referring to Larry Fitzgerald, Michael Floyd and John Brown. All three complement each other well, and display skills that are deadly in different parts of the field. All of their roles are solidified and while that caps their potential slightly, the overall efficiency and volume of the passing game should provide a high floor for them. JJ Nelson is a second year speedy deep threat out of UAB. He posted a sub 4.3 forty at the combine and should be in line for the fourth receiver role. He's garnered some buzz this offseason, including praise from coach Bruce Arians, one of the main masterminds behind the offense. While he'll likely need an injury to find a prominent role, he could be someone to emerge as a dangerous DFS tournament threat if he's unleashed.

Tight End is nothing to ride home about. As mentioned, Jermaine Gresham is back again for another year, but he simply wasn't a big part of the passing game last year, and accepted his role as a run/pass blocker. Troy Niklas has shown little promise or ability to stay on the field since he was drafted in the second round a few seasons ago. They initially hoped he could eventually become their starter, but alas, has yet to grab the reigns.