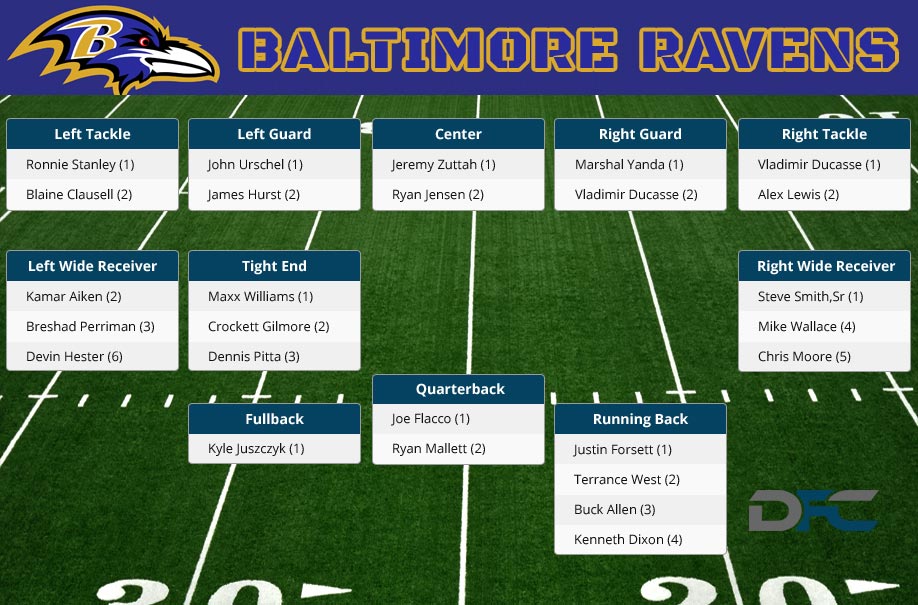 
Joe Flacco should be fully healthy and ready to go in 2016, but obviously he had a rough 2015. Flacco is coming off a torn ACL that happened in the middle of last season. All reports are positive, and there should be no concern about him being ready for week one. Behind him is Ryan Mallett, and solid backup, but no threat to the starting role.

Running back is where things begin to get interesting. While Justin Forsett is currently listed as the starter, he battled through injuries last year, and wasn't all that effective when he did play. Javorius Allen took advantage of the injuries last year and took on a feature role down the stretch that netted multiple fantasy relevant performances. Kenneth Dixon was a fourth round pick in this years draft, and while he was highly touted by a lot of scouts, isn't likely to crack the lineup in year one. This is most likely going to be approached with a committee philosophy. All three backs provide strengths and weakness and compliment each other.

While there's tons of options on the depth chart, there aren't many sure things. Kamar Aiken had a really solid 2015 and should be considered a real threat to take the top receiving role in the offense, but there's also significant downside. Steve Smith is Steve Smith, but he's coming off a major injury, and is 37 years old. Breshad Perriman is an uber athletic 2015 first round pick, but is still dealing with a potential serious injury, and there's no true time table on when he's coming back. Finally, Chris Moore and Mike Wallace are intermediate and vertical threats that provide some upside, but aren't likely feature players in the offense. Overall, it's tough to predict much beyond Kamar Aiken.

Maxx Williams is headed into year two of his career, and he should see a solid uptick in targets and snaps. While Ben Watson was signed in the offseason, it's tough to argue that the Ravens have bigger plans for Waton, even in 2016.