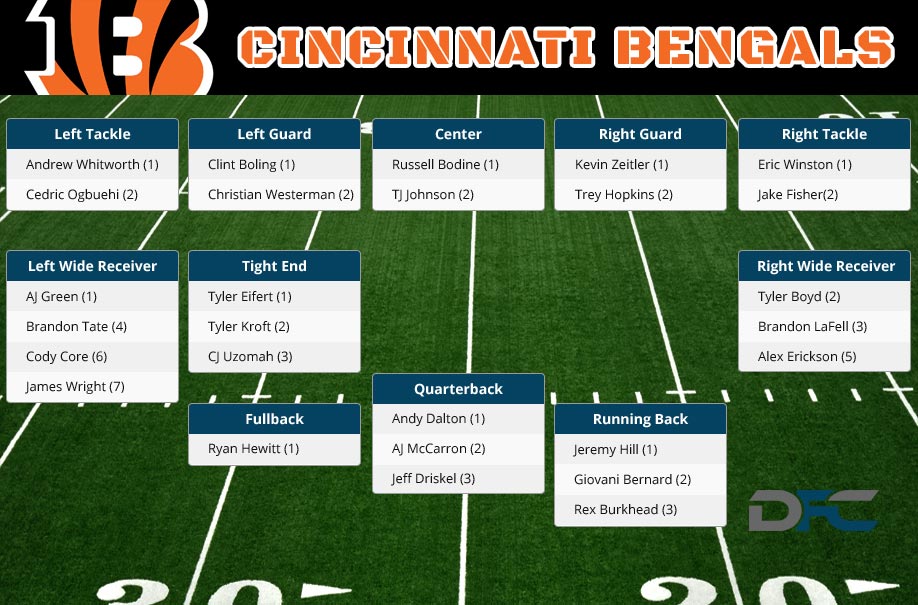 
The Jeremy Hill - Giovani Bernard combo has always been the interesting talking point for Cincinnati, and once again that is the case. Bernard out-snapped Hill last year (580-457). Hill rushed for a measly 3.5 YPC, but did have 12 touchdowns (11 rushing). The issue was that four games he had multi-touchdown games, so the amount of dud weeks did pile up. Bernard lacked touchdowns, scoring just two in 2015, but was the more efficient runner (4.7 YPC). He also is a solid pass-catching back, catching 49 balls for 472 yards. This year should be much of the same thing, as Hill is the bigger red zone back. A 12-touchdown season might be tough to reproduce given his inconsistency. If you are willing to take the dud, Hill will likely be the multi-touchdown target to take a chance on. PPR scoring, Bernard is a better target. Early on in the season with Tyler Eifert missing time, Cincinnati will look to rely on the pass-catching back. Keep an eye on him till Eifert's return.

Both Marvin Jones and Mohammed Sanu are out of Cincinnati, leaving a big hole at wide receiver behind A.J. Green. They signed Brandon LaFell and drafted Tyler Boyd out of Pittsburgh. He finished with 254 receptions over three seasons, and was strong on catching contested balls. His touchdown production might be low, but if he can get some a solid share of targets, PPR formats he might draw some interest in. At the moment LaFell is the guy to start out with, and see if a shift changes to Boyd. The Bengals didn't pass a ton, but were efficient in the 32 attempts per game they did throw.