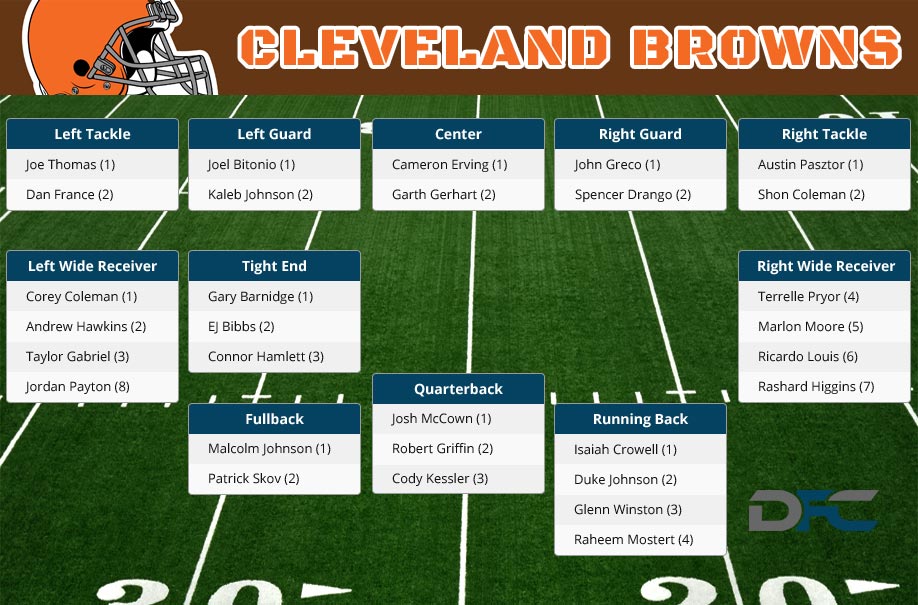 The Browns quarterback position is.. messy. Robert Griffin come over from Washington this summer, and should have a leg up on the starting quarterback position, but that still remains to be seen. Competing with him is Josh McCown, who started the majority of last season, and rookie third round selection Cody Kessler. These three should all see a significant chance at some point in the season, to grab the starting job, but so far it appears head coach Hugh Jackson is a believer in Griffin

The running game should feature Isaiah Crowell and Duke Johnson. Duke should lead the team in touches at the position, but Crowell will once again grind out games between the tackles and hold a strong role around the goal line. Johnson is in for a big up-stick in touches and should provide a solid ceiling behind them isn't much, but second year back Terrell Watson is a super athlete, and getting him from the Bengals was one of the first moves Head Coach Hugh Jackson made when he came to the Browns. The hyper-athletic Watson brings a ton of potential to the table.

As far as receiving options go, the Browns are stuck relying on a bunch of young players. They selected Corey Coleman in the first round of this years draft, and barring him messing things up, he should slot in as the top option in the passing game. Behind him, it's an all out war in training camp. Andrew Hawkins will likely start out the year as the second starting wide receiver, but at the same time, it might not take that much to overcome him. The Browns drafted Rashard Higgins, Jordan Payton and Ricardo Louis in the middle rounds of this years draft, and while most fourth round and beyond players don't contribute in year one, but they may be forced into action with the depth chart lacking with veteran options.

Gary Barnidge broke out in a big way in 2015, and should be in line for a majority of the snaps once again in 2016. They did draft Seth Devalve, but it's not likely he gets on the field much in year one.