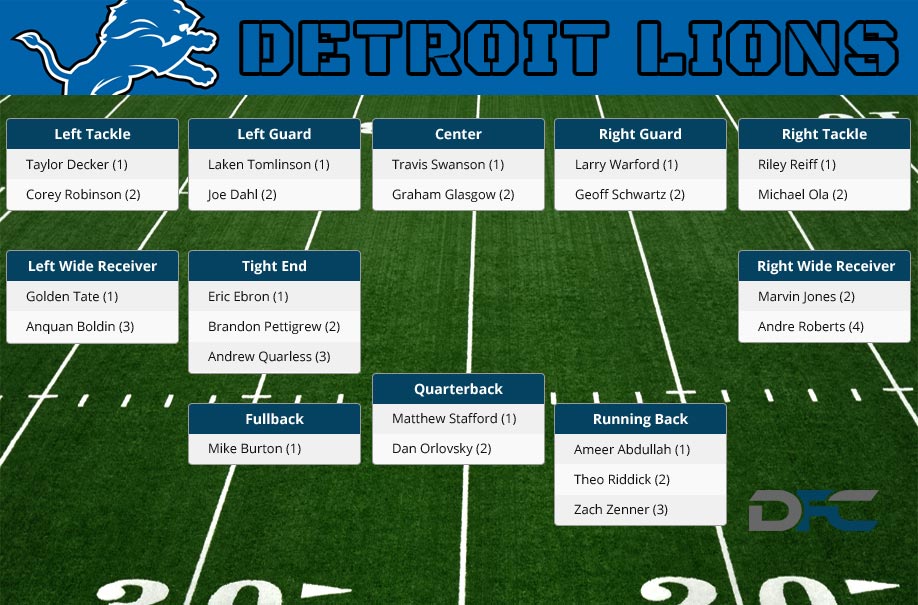 Even casual football fans are aware of the gigantic elephant sitting in the room of the Lions' offseason. Calvin Johnson retired after nine seasons in the NFL, which hurts the Lions on and off the field. The good news is, there is hope, and while no individual player can step into Megatron's shoes, their collective group is shaping up to be formidable.

While Matthew Stafford gets a bad rap for being inefficient and 'carried' by his former hall of fame receiver, he's actually been an above average, if not top ten quarterback over the last two seasons, and has done some of his best work without Calvin in the lineup. With all that said, he's the clear quarterback to own here, and the Lions are in big trouble if he goes down.

Running back is where things begin to get interesting. While Joique Bell has finally relinquished his role and stepped aside, Theo Riddick and Ameer Abdullah are both vying for significant roles. Riddick ended up being the more valuable piece last year - he claimed the receiving and third down duties as Abdullah struggled with injuries and fumble issues in his rookie year. That said, We've seen a lot of rookie running backs struggle in recent history, and that isn't an indicator of anything going forward. Second year back Zach Zenner, Stevan Ridley and rookie Dwayne Washington each have intriguing athletic ability, and will likely battle it out in preseason for injury/spot start duty.

With the Absence of Calvin Johnson, that leaves a lot of targets to go around. Golden Tate is obviously first in line, as he has been for the last two years when Calvin has gone down, and his consistency as the top target in the offense will likely continue. The Lions did sign former-Bengal Marvin Jones this offseason, however. They should form a strong tandem, and Jones should hover around 800 to 900 receiving yards as the do-it-all and sometimes boundary receiver. beyond those two, it gets thin quick. TJ Jones and former Jet Jeremy Kerley are likely to battle it out in preseason for who will be the third wide receiver in the passing game. If Jones or Tate does go down, there could be some hidden upside here.

Eric Ebron is entering year three of his rookie contract, and while disappointing from a fantasy perspective in his first two years, showed major signs of improvement in 2015. With Calvin gone and Tate and Jones being better served as strong second option, this opens the door for Ebron to potentially earn his spot and make that a trio of solid receiving threats. The Lions have a lot invested in Ebron, and if he shows more improvement this year, they really have no choice but to increase his role substantially. Beyond him, Brandon Pettigrew will do some of the blocking, but beyond that, his days as a passing game threat are finished.