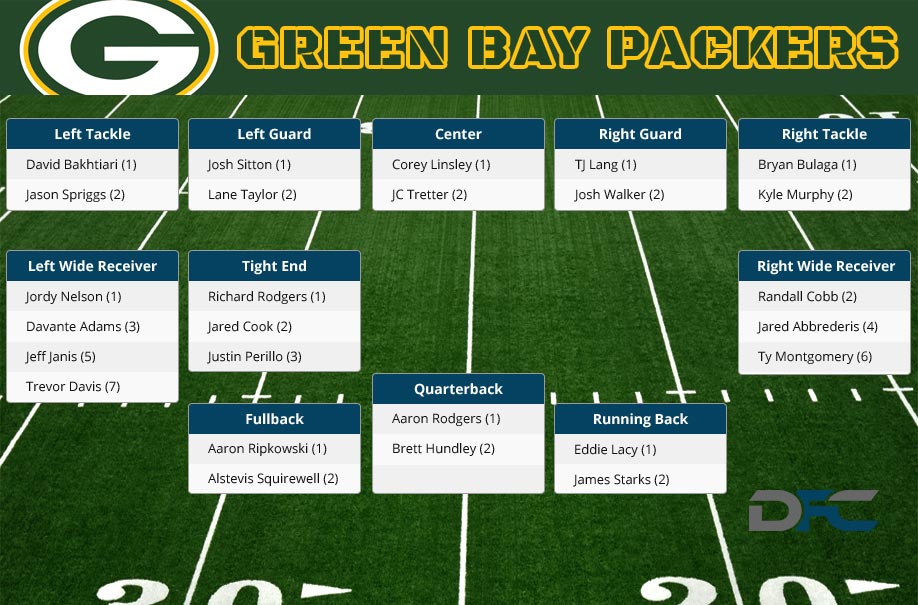 Jordy Nelson is on track to return to the Green Bay receiving core that desperately missed him last year. Randall Cobb took a step backwards, and the Davante Adams project was an absolute bust in 2015. With Nelson - Cobb lining up as WR1 and WR2, the WR3 spot is up for grabs. There is a handful of names to mention outside of Adams - Tyler Montgomery, Jeff Janis, and Jared Abbrederis. The three have potential to push Adams for a spot, especially if his drop rate is replicated in 2016. With Nelson back in the mix, that WR3 can serve as a viable option some weeks, but will take a back seat if Eddie Lacy can rebound to pre-2015 form. However if a Cobb or Nelson go down, these three names are the ones to keep in mind.

The Packers brought in veteran tight end, Jared Cook, this offseason and he will head into the 2016 season as the starter. Cook has not been a fantasy presence by any mean of late, but 85-95 targets from Aaron Rodgers is an immediate upgrade from his time with the Rams. His offseason surgery will force him to miss some time, which might hinder the learning process of the Packers offense, but health-wise he should be just fine. We are never really dealing with big names coming into the Green Bay offense, and this year isn't difference. Richard Rogers will take a backseat to Cook, who saw 85 targets last season, and averaged 5.3 per game. Cook saw 75, and averaged 4.7 per game. If the quality of the targets increase for Cook (as expected) you might be getting a nice buy-low candidate here for practically nothing. If he remains healthy, he should put together some serviceable weeks in 2016. Green Bay has a relatively easy schedule when looking at strength of schedule for fantasy tight ends.