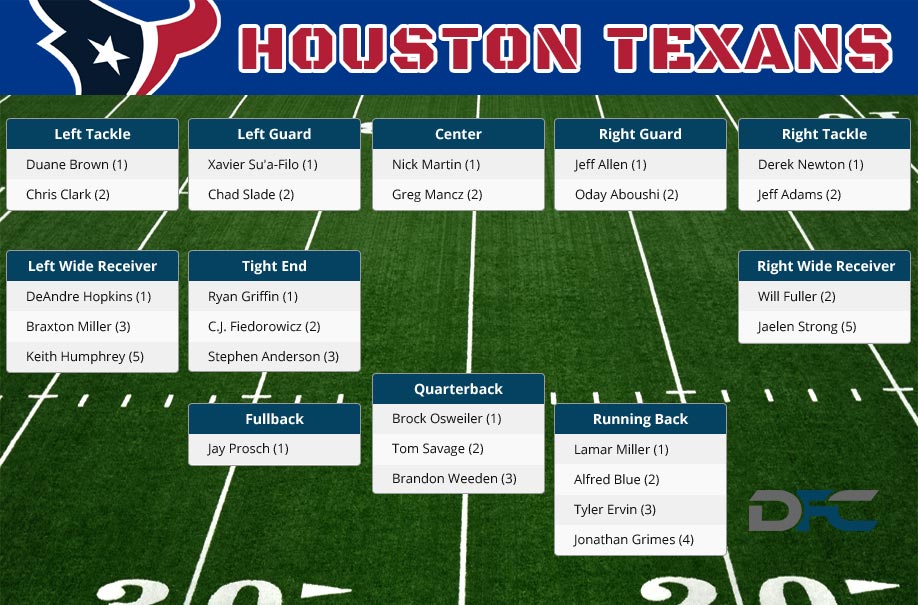 
There have been quite a few additions to this Houston offense, and a change under center. After a fantasy favorite, Brian Hoyer, led the way in Houston — Brock Osweiler signed a deal to become the new man in town. Getting $72 million for four years seems over the top for a QB who has made seven career starts, but who am I. He has a 61.3% completion percentage since entering the league as mostly a backup for Peyton Manning. Osweiler is going to have some weapons around him (Lamar Miller, Will Fuller, and DeAndre Hopkins).

Lamar Miller is going to be taking over for long time Houston back, Arian Foster. Miller was a productive in Miami, when given the chance. He has a career 4.6 YPC, and 19 rushing touchdowns, over 638 attempts. He is expected to be a big part of the offense, threatening to take some targets in the passing game. There is a ton of upside with Miller, and he should be a very friendly fantasy back on a week-to-week basis.

Houston lacked a true WR2 last season, and this year they went out and grabbed Will Fuller in the draft. He does have some drop issues, but is a burner. He will be a hopeful home run threat at the most, and should fall behind Miller and Hopkins in touches.