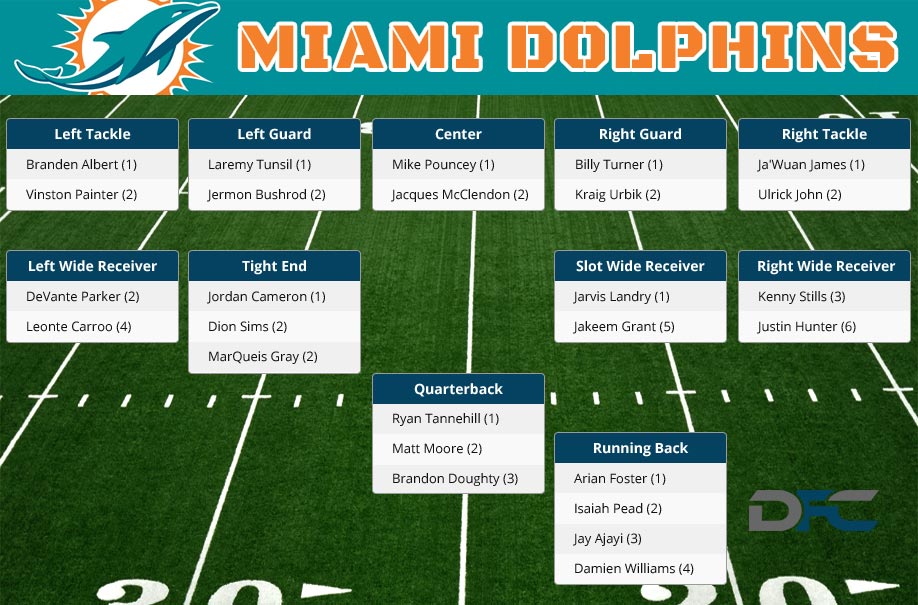 
Lamar Miller is off in Houston, and that might be a good thing for all of us. The workload for Miller was fairly small, and it disappointed many given how efficient he was. Miami has moved on, and former Boise State Bronco, Jay Ajayi, is making his move being the RB1 on the depth chart. Miami ran the fourth least times in the league last season (37%), and were below league average in receptions as well. That should change under Adam Gase, which I will go into more in the stats page. Ajayi isn't jumping off the charts as a guy to use heavily or rely on for cheap. He is simply about to see an opportunity, and we need to keep an eye on him possibly thriving in this scenario. Gase has lined up Ajayi as the number one heading into the season, but Kenyan Drake is closing in on the backup role. Drake had limited touches in Alabama, but we know the backs they churn out. His numbers were strong, especially his speed. He could be a force in the screen game, which would be another addition to Ryan Tannehill.

There hasn't been much out of the offseason so far that first round pick, DeVante Parker is going to amount to anything in 2016. He will have a starting job, but it seems Leonte Carroo could be on his heels. Parker has been hindered by injuries, which has hurt him in picking up time with Tannehill. Parker does have potential, and is still not a guy to give up on. Miami's passing attack should serve plenty of fantasy purpose, and a second guy needs to emerge behind Jarvis Landry.