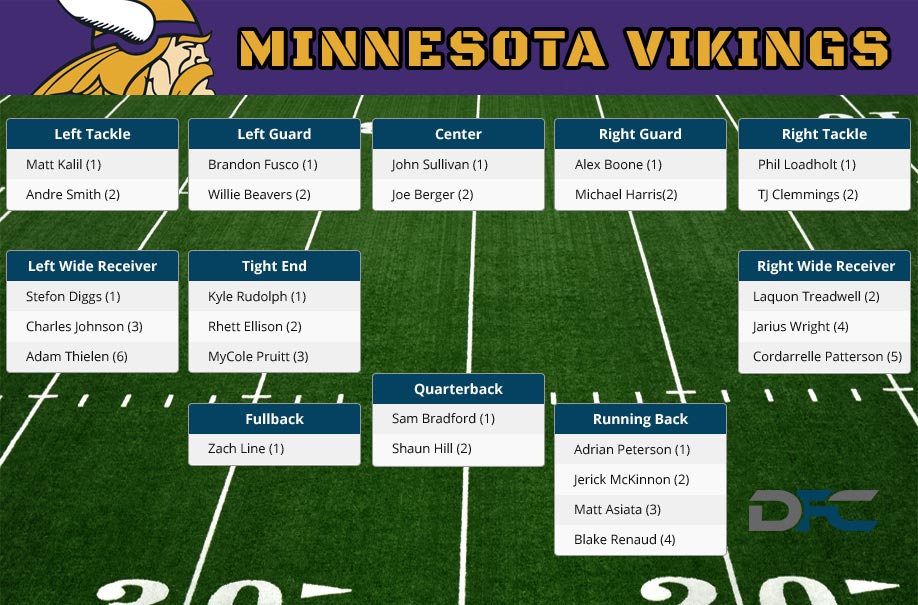 Everything seems remotely the same in Minnesota from year-to-year. Adrian Peterson is around, and the offense flows through him. It is a low-volume passing attack, but Minnesota might have the option to lean on the passing game if need be. Stefon Diggs had a sound year for a heavy running team, putting up a 52-720-4 line. This was gained through about a four week span, however. Minnesota has not put up a WR2 for fantasy purposes in a long time. Laquan Treadwell likely is not the answer, especially given the state of the offensive philosophy. Charles Johnson, Greg Jennings, and Cordarrelle Patterson have been flops in a system not meant to thrive beyond three players. Treadwell was a solid talent at Ole Miss, but there are a lot of doubts about him transitioning into a pro-level wideout. I would not expect a first year breakout from him, especially in this offense. Diggs and Kyle Rudolph should gain the small amount of pass volume over Treadwell.

Minnesota still remains an offense heavily reliant on Adrian Peterson, as they should be. They boasted a top defense last season, and the ground-and-pound offense blends well. The 31-year-old back rushed for 1,485 yards on 327 carries (4.5 YPC). There are no signs of slowing down, and Peterson will be another 300 carry back as he remains healthy. Jerick McKinnon and Matt Asiata will remain pass-catching backs, but won't amount to much given the volume.