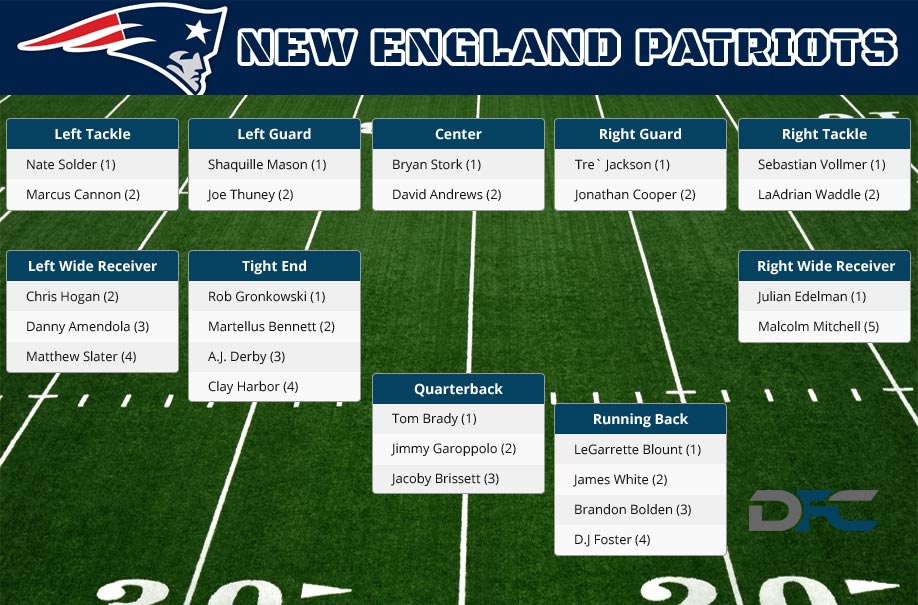 In terms of the running game, barring the Patriots being difficult and strange (which they're known to do), lagarrette Blount should be the back on first and second down, and Dion Lewis should take over on third down. Both were solid last year in their roles, and they didn't bring in any tough competition to compete with them. When Lewis went out last year, James White stepped in and was a solid option. He once again should be considered the main back up. Brandon Bolden is the likely replacement if Blount misses time.

Wide receiver is always an adventure for the Patriots, but if they stay healthy, it's pretty straight forward. Julian Edelman will once again claim a strong position as the top option for wide receivers. He'll man the slot/flanker role. Behind him, Danny Amendola, Aardon Dobson, Malcolm Mitchell and Chris Hogan will be competing for whatever role and targets they can control. In reality, whoever wins out in that battle won't like be a prominent figure in the offense either way.

Rob Gronkowski is the best tight end in football, and the clear top option for the Patriots at the position. Barring injury, he's in line for a ton of snaps. Martellus Bennett was a sneaky free agent singing, and should be considered a very strong second high end option. While most second tight ends don't get involved in the passing game, Bennett is talented enough to believe the Patriots will utilize him in the passing game.