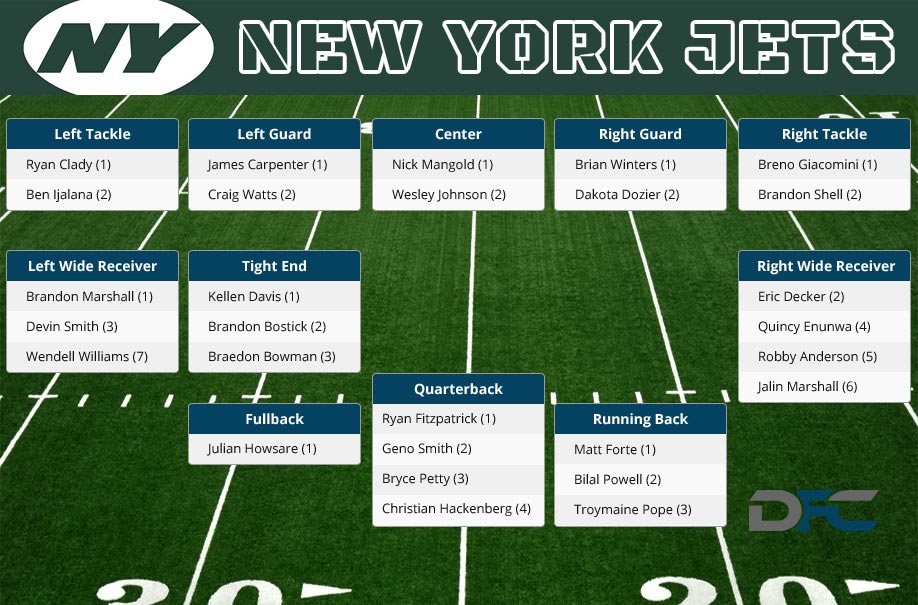 The big addition to the Jets over the offseason was signing the 30-year-old back, Matt Forte. Say what you want about running backs at this age, but Forte is in a spot to succeed. Offensive coordinator, Chan Gailey, is looking to acclimate the offensive system a bit towards Forte's skill set. Gailey mentioned lining up Forte in the slot, and using him as a pass-catching back, which is a nice transition given he was trending downwards in that department in 2015 with Chicago. He had just 44 catches, and the New York Jets voice around camp has me optimistic for an uptick in targets. Forte should have some better value on the full point PPR sites, and scoring.

At the moment the Jets are sitting with Geno Smith, Bryce Petty, and Christian Hackenberg as their three quarterbacks, while they struggle to negotiate with Ryan Fitzpatrick. It is time to play the what if game. The latest reports out of New York is that there has been no progress made, and while the Jets are clearly a better team with him, they are dragging this out. So, what happens if Fitzpatrick and the Jets don't get a deal done? Eric Decker, Matt Forte, and Brandon Marshall would take a little bit of a hit given the inconsistent nature of the three current QB's. While a 12-touchdown season for Decker is going to be tough to reproduce anyway, having Smith under center would make that very unlikely. Marshall was absolutely dominant in 2015, posting a 109-1502-14 line, failing to score in just four weeks. Marshall saw 173 targets, ranking 5th in the NFL.