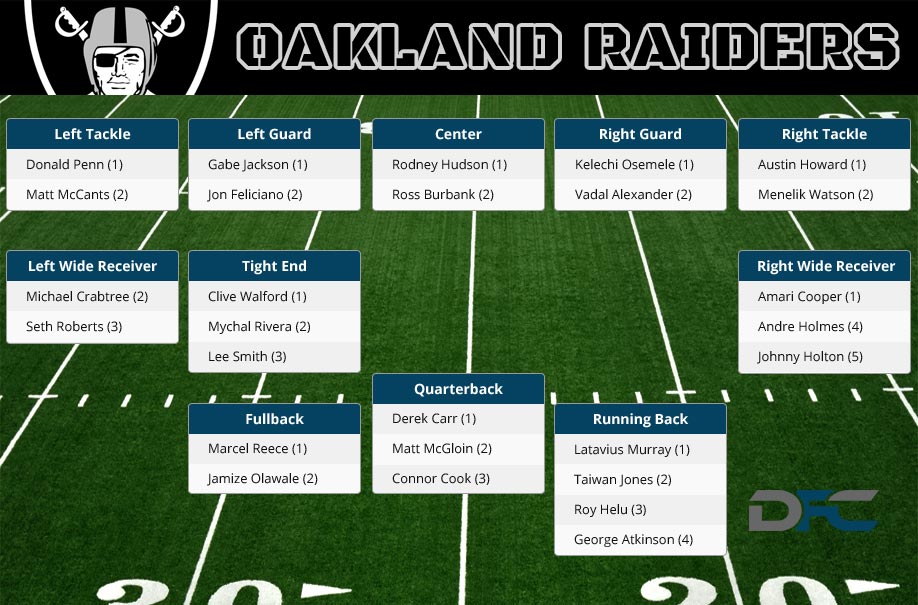 The up-and-coming Oakland Raiders offense is going to be a fun one to watch, especially through the air. Second year Amari Cooper had a solid rookie season, while Michael Crabtree looked like the receiver he was expected to be. Cooper finished with a 72-1070-6 line, while Crabtree finished with an 85-922-9 line. Derek Carr has two phenomenal targets to throw to, and the upwards tick in production should continue to thrive in 2016. Latavius Murray rushed for over 1,000 yards last season, on the third most attempts in the league (266). He wasn't particularly productive with a 4.0 yards per attempt, but in a rare workhorse era, he was one. 2016 might hold to be a little different for the Oakland running game given they drafted DeAndre Washington.

Washington is a small back sitting at 5'8 - 204 pounds, but the former Texas Tech back was strong after contact in college. While yes, the NFL is a different animal, there is a lot of reasons to like Washington in Oakland. His pass protecting skills are a plus, which can lead to an uptick in snap %. Pro Football Focus graded him with the 3rd-best elusive rating, and he can be a force in the passing game. A versatile back could be a threat to Murray's workload this year. The offensive line in Oakland is above average in comparison to the league, and Washington could be that third weapon Oakland needs to compliment Carr, as well as a secondary back to Murray. 26% of receptions were by running backs in Oakland, which ranked in the top half of the league. Keep an eye on Washington as an emerging threat, and expect Murray to trend downwards in workload.

The passing game was centered on Cooper and Crabtree last season, and Clive Watford could make a jump as the starting tight end. He had a subpar rookie season, but the second-year tight end could make a jump in 2016. He had just 51 targets last year, but this stout passing attack could be even better, leading to more targets, as well as a jump in efficiency. Most weeks Watford will be an overlooked tight end, leading in low buzz. Oakland threw the ball 62% of the time, which was 7th in the league. Watford could emerge as a number three target for Carr.