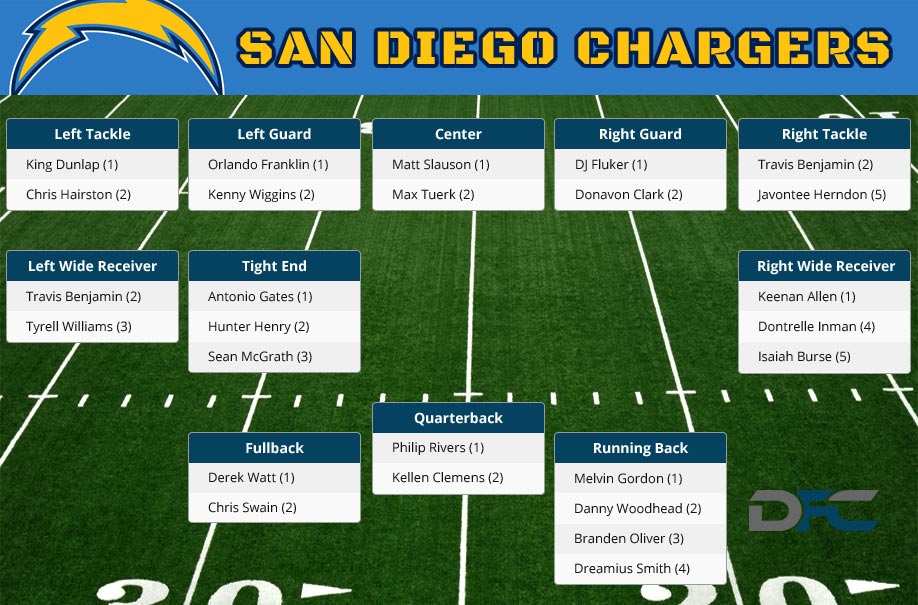 
Phillip Rivers is once again going to be the definition of Chargers football. He's been with the team for over ten seasons, and barring an big injury, should play almost every snap for the Chargers in 2016.

Running back is where things get interesting. Melvin Gordon was a 2015 first round pick, and while he struggled with injuries and bad play in his rookie season, he should have a good hold on the feature job. He was highly involved in the rushing and receiving game, and should be once again. Danny Woodhead is the clear third down and passing game back on the team. While he is getting up there in age, his role as a nifty runner and passing down back doesn't need THAT much athleticism. Brandon Oliver is the backup, and should step into a significant role if either Gordon or Woodhead were to go down.

Keenan Allen is back healthy, and should be a target hog number one receiver once again in 2016. White Allen will be the top receiving option, Travis Benjamin will have a pretty solid role as the teams deep threat. Benjamin came over in free agency from the Browns. He signed a reasonable contract that should net him a very solid opportunity for snaps. With the loss of Malcolm Floyd to retirement, Benjamin's speed and ability in the vertical game should be a good matchup. Stevie Johnson is there for Keenan Allen insurance, and also, will pick up any extra close to the line of scrimmage targets

Antonio Gates is old faithful at this stage. He simply keeps going. While the Chargers did draft Hunter Henry in the second round of the 2016 NFL draft, he shouldn't steal significant targets away from Gates barring an injury. Henry will likely have some type of role, especially in the redzone, but that will likely come in two tight ends sets instead of taking Gates one tight end set snaps.