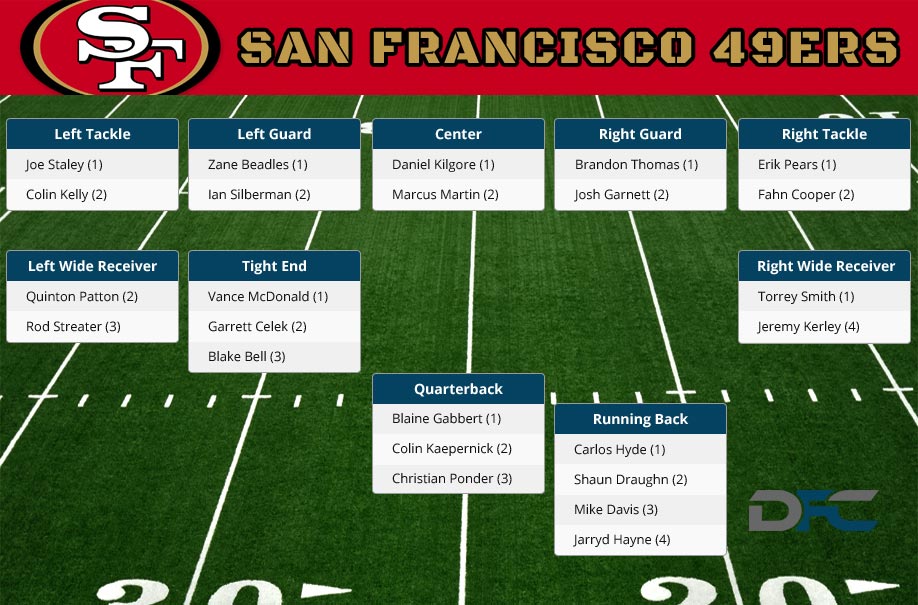 
With Chip Kelly in town, it's very likely that a lot of things are shaken up considerably in 2016. Colin Kaepernick and Blaine Gabbert will battle again in training camp this year for the starting quarterback position. Based on last season, Gabbert has the slight edge, but at the same time, with Chip Kelly, this is a really solid chance Kaepernick gets a shot at some point in the season because of his rushing ability.

The running game should once again be built around Carlos Hyde. While this requires Hyde to stay healthy, the up tempo offense should provide more plays, more runs and more opportunity to succeed. Shaun Draughn should be the main backup if Hyde were to go down, but at the same time, last season was a small sample size with a different coaching staff. Mike Davis is also a young player in that backfield with reasonable upside.

Torrey Smith is likely to reclaim the top receiving duty after a long year with little targets in 2015. behind him, it's a bit of a mess, but it appears that Bruce Ellington has begun to solidify himself as the second wide receiver in the offense, potentially a in a pure slot role. Behind him is Quinton Patton and DeAndre Smelter. Smelter is a vertical threat with strong athleticism, he brings strong upside and could replace Torrey Smith if he goes down. Patton is more of the slot receiver type.

For tight end, it appears Vance McDonald is set to emerge in year three of his career. The former second round pick has struggled to find the field in his first two seasons, but he started to emerge at the end of last year, it appeared the light went on. Blake Bell is waiting in the wings, but the former quarterback likely needs another year before he can truly emerge and take a lot of snaps.