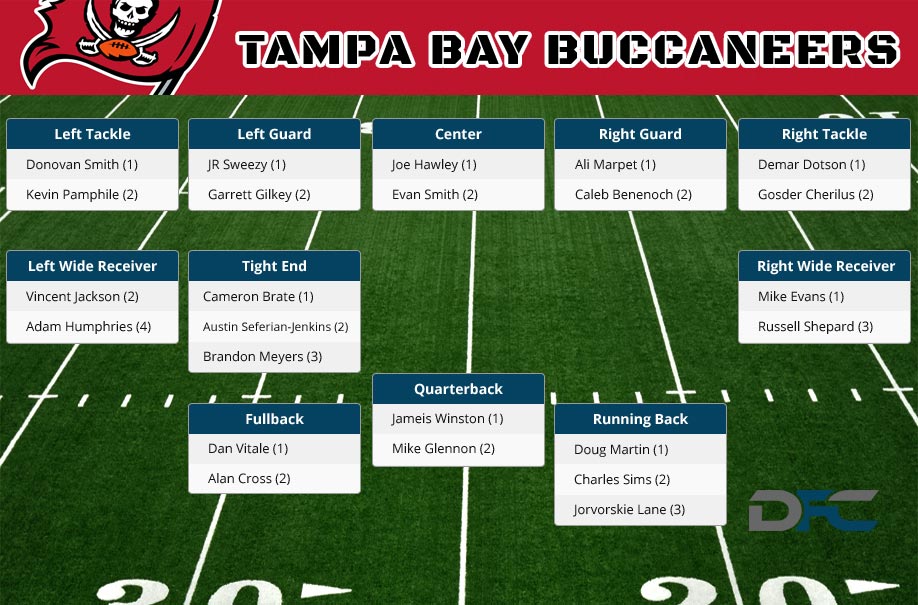 Jameis Winston is entering his second year, and is the clear starter in the offense. He's a former top overall pick and was very successful in his rookie campaign. Mike Glennon is a solid backup quarterback but isn't any threat to Winston. If Winston were to go down with injury, Glennon is a really solid backup

The running game is pretty solidified. Doug Martin will be the feature back, but Charles Sims will have a significant passing down role. Martin should get above 250 carries if he stays healthy, and should be the main goal-line back. Should Martin get injured, Sims would shift into a pseudo-feature role that could result in strong and consistent fantasy outputs. beyond those two, there isn't much, but Mike James is listed as the third back.

Mike Evans is the clear top option in the offense, even despite struggles with drops in his second year. Evans should see somewhere between 140 and 160 targets. Vincent Jackson is healthy and finally back. Jackson is getting on the older side and isn't a featured option type anymore, but at the same time he doesn't need to be. With Evans as the featured wide receiver, Jackson can work on the secondary defenders that will be guarding him. beyond Jackson, Kenny Bell is the likely going to be the third option. Bell is athletic and should fit nicely in the slot, though that role may not provide a ton of upside.

Austin Seferian-Jenkins and Cameron Brate are going to battle it out in training camp and preseason for who wins the starting tight end job, there's no real leader at this moment. Seferian-Jenkins provides much more skill and athletic ability, but he hasn't found his way to fully apply it yet.