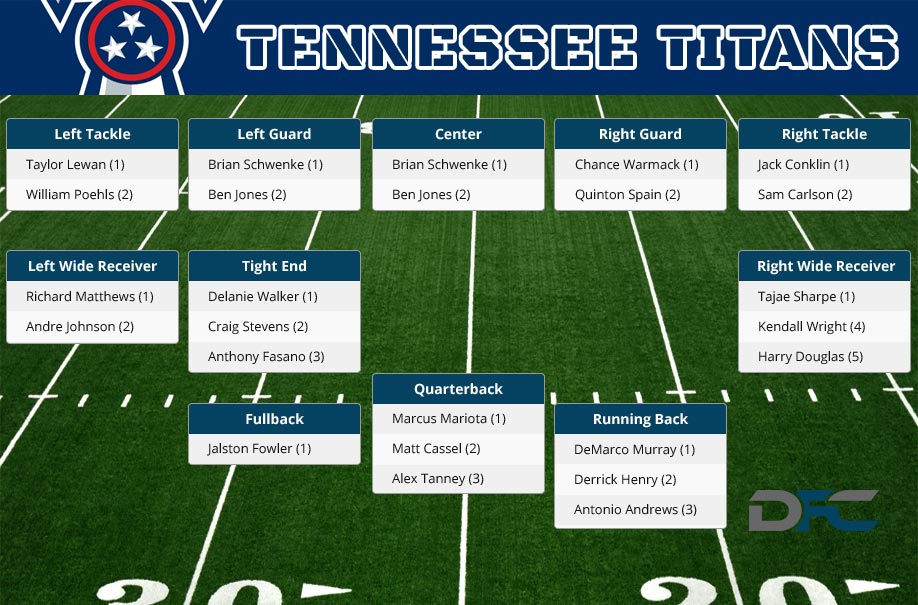 
After failing in the running back department for a while, Tennessee went out and landed DeMarco Murray, via trade with the Philadelphia Eagles. He is coming off of a very pedestrian season, rushing for 702 yards, and six touchdowns. The 3.6 YPC was amongst some of the worts in the league. The Eagles scheme didn't quite workout for Murray, nor did the committee of backs with him. Unfortunately the offensive line isn't exactly up to speed, in comparison to what Murray is used to. I am not sure this is the situation where Murray bounces back with a 1,000 yard season, and 7-8 touchdowns. Tennessee is a young group, and giving up 26.4 points per game doesn't exactly give you the ability to run the ball. I am not overly optimistic, but Murray should return to a 4.0 YPC mark, which still doesn't have me jumping off the rails for him.

The wide receiver core around Marcus Mariota is very subpar. Kendall Wright, Harry Douglas, Justin Hunter, and Dorial Green-Beckham are all battling for wider receiver spots, and everything is up in the air right now. The issue with the core and their fantasy production is they are in a situation where the fluctuation gets in the way with building a rhythm. They are also behind Delanie Walker, who was Mariota's go-to man last season. Overall this is a situation that doesn't need immediate attention, but we could see a value WR1 develop out of Tennessee in a hopeful situation.