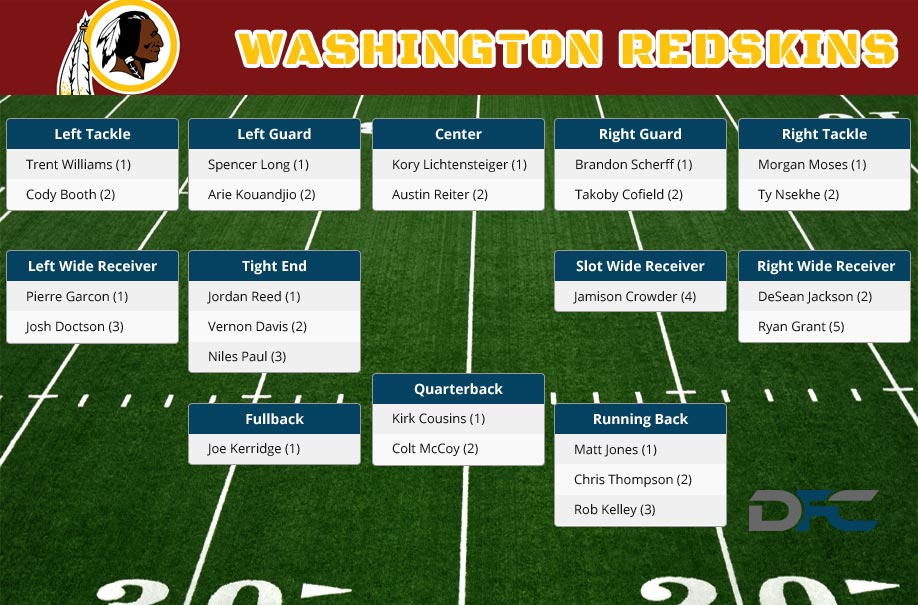 Kirk Cousins has solidified himself as the starting quarterback for this redskins team, and has a new extended deal to show for it. He's the main option and beyond him it's could get bad quickly.

As far as the running back position is concerned, Matt Jones is the only thing they have with feature back potential. They drafted Jones in the third round out of Florida in the 2015 draft and he's in line to be the feature back in this offense, both from a receiving and rushing perspective. Behind him is Chris Thompson, who should garner a solid receiving down role regardless of Jones status, and should see significant snaps on third down. If either of those players were to go down, Keith Marshall is a rookie seventh rounder out of Georgia that could emerge with a role.

DeSean Jackson is back and healthy for the 2016 season, something that can't be said for last year. He should once again reclaim his role as elite vertical threat, and accumulate high upside targets throughout the season. While Jackson should lead the receivers in targets, there's still a bunch to get squared away below him. Pierre Garcon is getting paid like a top receiver, but with the Redskins drafting Josh Doctson in the first round of the 2016 draft, there's a real chance he could lose significant snaps and targets to him in year one.

Doctson is a high flying athletic receiver who should be able to come in and make an impact in year one. While they both likely average each other out, if an injury hits either of them, the other could pick up quite a bit in terms of team targets. Beyond them, Jamison Crowder is the fourth option, but he would be higher on most teams. Crowder had a really solid rookie season, going for above 500 receiving yards and being a reliable slot receiver for Kirk Cousins. With everyone back, Crowder will likely go back to a limited role in four wide receiver sets.

Jordan Reed is arguably the second best tight end in the league, and is the clear starter and passing down tight end. His injuries could be an issue, if that's the case, Vernon Davis was signed in the offseason.