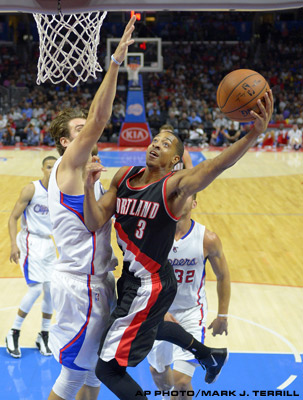 The Portland Trail Blazers are looking like a new team. With new faces all around the organization, it seems some familiar faces have been forgotten. One name in particular is CJ McCollum. A standout from Lehigh, a small division one school out of Pennsylvania, McCollum has always had a chip on his shoulder. His freshman season he averaged 19 points a game and continued dominating through his senior season, becoming the Patriot Leagues' all-time leading scorer. CJ left Lehigh after his Senior season, declaring for the NBA Draft where he was expected to go early in the process. The Blazers, after taking another small-school player in Damian Lillard the previous season, chose McCollum 10 th overall in the 2013 NBA Draft. Since then, McCollum has been gradually working his way onto the NBA scene. Being injured and playing behind star guard Wesley Matthews his rookie year, he was overshadowed, but certainly proved his worth in the most recent post-season series against the Memphis Grizzlies.


The bright spot in the Blazer's first-round playoff series this past season, McCollum went to a starting role as fellow guards Arron Afflalo and Wes Matthews were injured. Not only did he get a starting role, but he averaged 17 points per game while shooting a steady 47% from the field, including a career playoff high of 33 points against one of the NBA's toughest defenses. 2 seasons into the league, McCollum has started his rise to stardom. Even though he is many people's pick (including Kristen Ledlow and myself) for a breakout season CJ isn't taking anything for granted. Currently, working out in the off season with the likes of Steve Nash and other NBA coaches, staff, and trainers, I had a chance to catch up with him while he was in Toronto with his team.

CJ McCollum struck me as an intellectual basketball player, someone who is constantly working on his game and how he handles himself. On and off the court, I was impressed by McCollum's breadth of knowledge and interests. He is clearly a genuine person who cares about others. In this Q&A, he answers your twitter questions and talked about everything from his Cleveland Browns to Will Ferrell movies, Check out what CJ had to say below! #AskCJ


Q: No dunking allowed, who wins in a game of H-O-R-S-E between you and Kristen Ledlow?


Q: What 3 NBA players aside from yourself, do you think will take big strides next year?

A: I think Otto Porter Jr is going to have a good year, finished the season strong last year. Zach LaVine is another guy. He looked nice in summer league, got a lot of bounce. And then I like Archie since Archie Goodwin was in my class. I worked with him last offseason in LA and he's a hard worker, still really young too.


Q: Do you play fantasy basketball or any other fantasy sports? Any good stories?

A: I've played fantasy football in high school once. I mean you want to pick up guys from your team and you get connected to guys that on your team. As a Browns fan, you can imagine that didn't go so well. But hopefully this year I'll get into a league if it's not to late and the Browns will be better this season.


Q: What is your favorite Will Ferrell movie?

A: Whew, he's got a lot of good movies. I like Semi Pro, but I also like Step Brothers. I like the part when they are watching shark week, that's a funny scene man.


Q: Who do you think won the battle between Drake and Meek Mill on the diss tracks?

A: If you look at the charts and ratings, its clearly pointing in Drake's favor.

A: Dogs for sure. I don't really like cats, they creep me out. I mean, I don't hate cats, I just prefer dogs. I know Meyers, my teammate has an alaskan husky.

A: I haven't eaten Taco Bell since college. So I'll go for Del Taco by default, I don't even know if I've had Del Taco.

A: Man……your going to make me pick one song? That's tough. But I got to go with some Future for sure. Drake came out with hit after hit, to pick one song would be impossible though. If I was to say artists, Future and Drake would be the guys this year. Oh and I forgot to mention J. Cole, I love his stuff!


Q: Are there any charities you work with, that you'd like people to know about?

A: Obviously, I've got my off-season kids basketball camp. I'm in the process of working out some paperwork for a couple of partnerships on providing scholarships to underprivileged youth. I'm looking to do a literacy program as well, but it hasn't been established yet. I've always given out two scholarships in my hometown of Canton, the Martin Luther King scholarship, where kids write essays and we pick the best ones to grant them money for College. You have to understand the importance of education for underprivileged students and kids who may not get the opportunity or think they can get to school. With LeBron being from Akron in my home state, I always look at what he's doing and it's always good to see fellow players giving back like that.


Q: Do you think Overseas Elite would've won the NCAA championship this year?


Q: What are your favorite books?

A: One of my favorites is Love Does by Bob Gouss, The True Success Story by Malcolm Gladwell. I read a lot, but lately, those are two books I really like.


Q: Who is your favorite Cleveland Browns player?

A: I have to get a Joe Haden jersey, everyone likes him. I like Terrence West, the small school guy, and Brian Hartline went to my high school, so that's another guy I really like.


Q: What kind of noise do you think the Browns make this year?

A: I think we will be much improved, definitely. I like that we are well-rounded, guys are healthy, and our defense is always good. Terrelle Pryor helps out in either tight end, wide receiver, and we had some good picks in the draft as well. I like are chances to float around .500 and sneak into the playoffs.


@CrazyGabey (Beard Activist): Why don't you have a beard?

A: I think my game resembles a mix of a lot of players, I try and be a little like everyone, I went to a small school, always a good shooter. I watched a lot of Jarrett Jack, Chauncey Billups, and Joe Dumars. Not saying that Dame and I resemble Joe Dumars, Isiah Thomas, but both were 6'5" and under and played in the back court.


Larry Krall: What benchmarks have you set for yourself?

A: I set goals every year. I always have percentage goals. I want to shoot over 90% from the free-throw, last season was the 2 nd lowest of my career at 69%, I think that should be about 80% this season. I always want to improve shooting from the field, last season I think I shot 43%, so I am wanting to try and get that to 45 to 48%. Ideally, I'd like to be at 50%, but that's tough when shooting a lot of jumpers in a game.


@TheSeigeDFS: Who is the hardest player you've had to defend?

A: James Harden is really hard to defend because he knows how to get fouls, he draws the foul well. Obviously, Steph Curry is another guy because he can pull up from anywhere and he can also make the pass as well. He is quick on and off the ball, so he makes it tough to defend.


@BChad50: Which players did you idolize or emulate growing up?

A: I watched a lot of Allen Iverson, he had a chip on his shoulder, nasty crossover, and I liked watching him a lot. Obviously, the Jordan's and Kobe's were other guys I took note after and liked to watch as well.

@SixthManJared: If you got injured doing something stupid in the off season, what would your cover story be?


@BRANDONRING72: Are the Blazers ready to win right now with their young squad or do they need a year or two to hopefully return to success?

A: I think we are in a position where we look pretty good, obviously we've got a lot of young talent, its different then the past couple seasons because we have new guys, so it may take some time to gel. But I think we will be good. You look at the Phoenix Suns, they were in a “rebuilding year" and they were just a couple games out of the playoffs in the west, where they would've been in the playoffs in the east. It'll be a challenge but guys are hungry and looking forward to an increased role with amble opportunities to produce.

Sam
Nice work Oliver! CJ has a lot of things right, but nothing beats Anchorman! Definitely looking for CJ to have a big season when he gets the minutes. Seems like a good guy. I'll be rooting for him this year!

JasonG4s
I like the comparison to the Suns, definitely should be floating around the bottom playoff spot in the west. Great article!!

bigitaly42
CJ, you've got to try Del Taco. It is in the elite tier of fast food. As always, great stuff here Oliver! Thanks for the insightful responses CJ. As an Ohio boy myself, I can relate to the optimism in the NFL!

joshshep50
Fun stuff Oliver and CJ. Thanks for answering my question. It feels strange being old enough that young NBA players were watching and rooting for the generation of players I grew up watching!

Sam
The Canadian support is strong! All in all, weren't they both a bit disappointing?