DraftKings is a bit different from FanDuel when it comes to a set roster. You have two centers, a goalie, and two defenseman, like FanDuel, but are given three wing spots and a utility spot. Your utility spot can consist of any non-goalie player. Centers and wings are much more offensively involved and are preferred plays in the utility spot. Keying in on the strong positions on an individual slate can also be key. There will be nights where there are far more strong center choices than wingers, resulting in you to use a center in your utility spot. On other nights it could be the opposite. Lineups can be balanced, stars and scrubs, or my personal favorite, stacks.

Before playing on DraftKings.com, read our draftkings review and draftkings promo code articles.

Whether it is cash games or tournaments, stacking is a viable strategy. Your first stop will be Vegas, which will lead you to finding high projected scoring offenses to target. Once you have locked in on an offense or two, finding their lines is the next step. We will take Boston for example, who have been a great stack this season. Most of the time we look towards the top two offensive lines and the powerplay lines. The correlation can be seen here with Left Wing Lock's line production chart.

David Pastrnak, Patrice Bergeron, and Brad Marchand have combined for 22 goals this season. That is the eighth most in hockey. Hitting on these guys on a single night can give you a high floor, but also a high ceiling willing to take down a GPP.

You will often start off with a goalie in your lines to let you know how much salary you have leftover for your skaters. In cash games, paying up for a consistent, Vegas favorite, and high floor goalie is the logical move. There are four goalies below, which all vary have had similar ceilings, but not the same floor. Devan Dubnyk has been in a league of his own, averaging over 5.5 DK points per start. Tuukka Rask certainly is a cash game play, but we start to push more GPP territory after him. 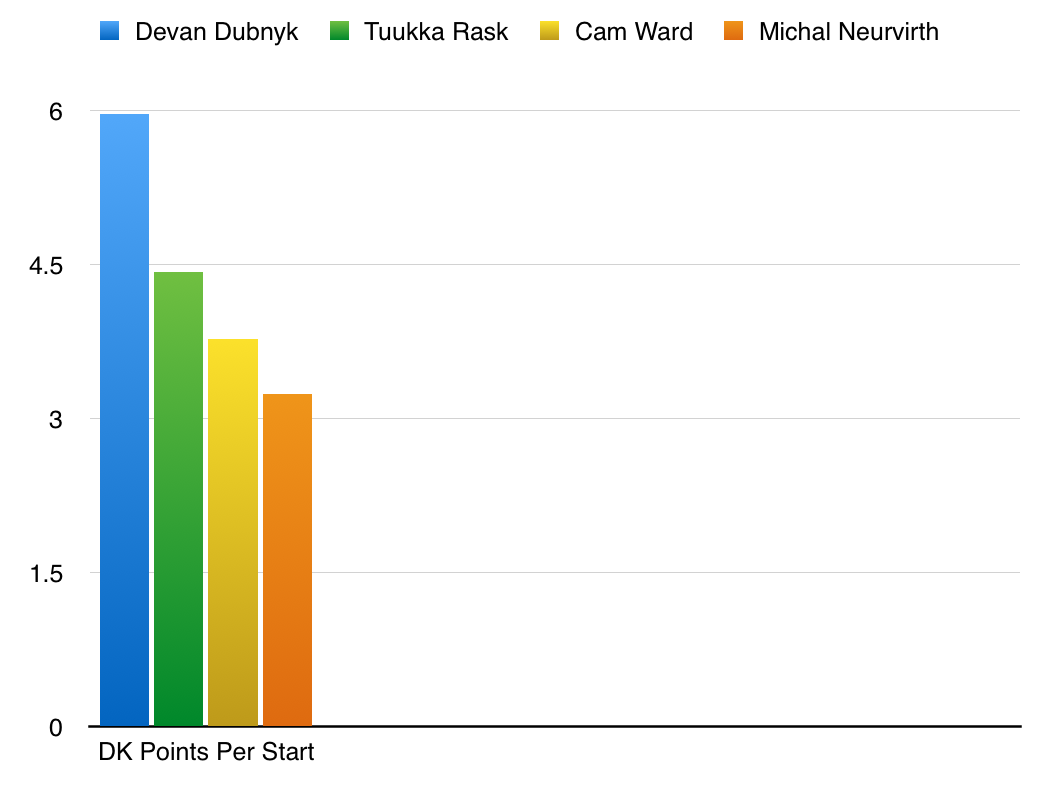 Going back to that Boston Bruins line of David Pastrnak, Patrice Bergeron, and Brad Marchand, they are generating the third most shots for of any line in the NHL. This is certainly no fluke with how they have been scoring this season, and you will certainly need to find lines that produce a lot of scoring chances. A Toronto line of James Van Riemsdyk, Mitchell Marner, and Tyler Bozak have generated a league leading 607 shot attempts for, and rank second in goals for. Time on ice can contribute to this, which is why you find to be looking for skaters who will be playing 17+ minutes on ice. Defenseman will always play heavier minutes, so you can go deeper into defense for value, and keep an eye on who plays the powerplays.

If you are playing tournaments, you will likely want to avoid higher ownership teams. On a full slate, you can always bank on teams like Pittsburgh, New York, and Dallas to be high owned, and also expensive. A team like Pittsburgh gives you essentially two stacks, the Crosby line, and the Malkin line. They both will draw high ownership, yet Crosby is a name that sticks out just a little bit more. Working in a cheap winger along those lines, or a Kris Letang can separate you from the higher ownership crowd. Always remember, you can still be different while stacking the most obvious team of the night.

Finding a team that is projected for over three goals happens most nights, and when teams like Detroit or Vancouver fall into those totals, you can still get them at lower ownership. Mixing and matching them with a top stack is a great way to be contrarian without diverting completely off the grid.

Goaltender play can also lead you to be different. If there is a chalky expensive goalie option, the masses should gravitate towards them. If you can find a heavily favored goalie for $2,000 cheaper, you can now spend that extra on skaters.