Every team selected on DraftKings consists of 9 Players totaling $50,000 in Cap Space. Each roster must consist of players from a minimum of 2 NFL Teams and represent 2 separate NFL Games. Read our draftkings review to get the full company profile and before depositing, use our highest draftkings promo code offer.

This is a major difference between DraftKings and other sites right now.

Late Swap – The ability to remove a player whose game hasn't started from your lineup after the contest has begun.

Example: You play NFL games for the weekend and you have Jamaal Charles in your lineup who is playing in the Monday night game. He turns his ankle in the Monday walkthrough and won't be playing on Monday night. On DraftKings, you can still swap this player out for his backup at the very least, instead of taking a zero like you would on sites that don't have this feature.

Injury News - Keeping Up to Date

Injuries are a huge part of a contact sport like football. The good news for us fantasy players is that official statuses are now reported by the NFL three times each week on Wednesdays, Fridays and an official listing one hour before game time. That last bit there fits in nicely with the DraftKings late swap feature as you'll be able to wait for these official statuses before making final decisions on each particular spot on your roster, which should save you from ever having any accidental zeroes on your team. Using Twitter and other new sources are great, but for NFL, DraftKings provides a lot of the info right to you via notifications and player news.

Betting odds and totals are a huge part of constructing rosters during football season as it is one of the most heavily bet things in all of the United States and therefore has a ton of time being spent creating the odds and lines. As we mentioned in a few Daily Fantasy Cafe Daily Academy articles, using the spread and point total to project game flow and scoring is a huge help when selecting players and teams to target. The easiest formula to do this is (Total-Spread)/2 then add the spread back to the favored team, but not the underdog.

The biggest part of winning fantasy football contests on DraftKings comes down to finding players who are both going to get opportunity and take advantage of that opportunity. There is a solid .73 correlation between opportunities and fantasy point scoring for all positions in the NFL. We consider an opportunity a pass attempt, rush attempt or target. Of course, those are voluminous in that order and is the reasons that the positions themselves, QB, RB, WR and TE each have a much different average score for the season among starters. All positions are not created equal, which is a big point we'll get to later about roster construction. For now, let's take a look at the correlation graphic. 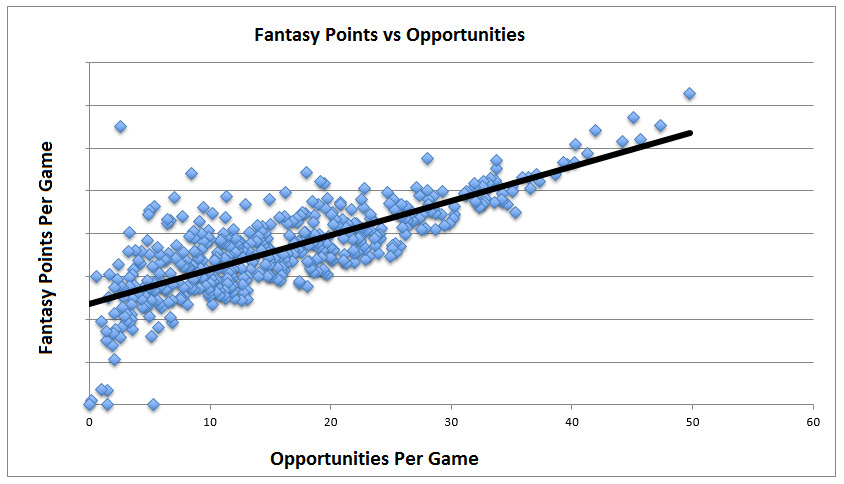 As you can see above, this is a very strong correlation here. As players receive more and more opportunities, they start scoring more and more fantasy points. One of the major reasons for this consistent rise is big plays. Big plays are the great white buffalo of fantasy football. We need them, but they don't come as often as we like and we never get back the ones we missed. However, the more opportunities a player has, the more likely he is to find that next big play, especially if that player has the talent to turn any play into a big one, such as Jamaal Charles. While grinding out fantasy points with guys like the Benjarvus Green-Ellis of old is fine and dandy for cash games and small field contests, we need that consistent exponential rise we get from the talented players in addition to the opportunity.

DraftKings offers some of the most in-depth roster construction in the industry, offering both three wide receiver spots and a flex option that allows you to play a fourth wide receiver, third running back or second tight end. Roster construction is the final frontier when playing daily fantasy football. You can do all the research and reading in the world, but if you can't put together a roster that uses that information to the fullest, you won't succeed and therefore won't win. All positions in fantasy football are not created equally. Quarterbacks will simply always score the most points, the most often. They are engineered for success in the game, receiving almost as many points for touchdowns as other skill players, but scoring them at a much more frequent rate, especially the elite ones. In most cases people say to target elite quarterbacks for the incredibly high ceiling and floor, but even weak quarterbacks are still going to have a nice floor. That's what makes the game's highest scoring position so exciting, is that most quarterbacks are in play each week if they are priced somewhat correctly.

On the other hand, running backs are often priced out of contention for roster spots because of tough matchups or lack of usage that simply makes them unplayable that week. Receivers, including tight ends, fall more towards the quarterback category as they rely a little bit less on opportunity than running backs, but provide more big plays as well. Ultimately, you are trying to score the most points you can with the way all of the players are priced that week. In cash games, you'll be targeting safer players, while in tournaments you'll be targeting higher upside ones. You can learn more in-depth about this in our Daily Academy posts.