FanDuel switched their rosters around a bit for this season, and hopefully keep this moving forward. Instead of broken out left and right wings, we get just a collaborative group of four wing spots. This is in addition to two centers, two defenseman, and a goalie.

Scoring between the two major sites is very similar. The only difference is FanDuel counts powerplay and shorthanded point bonuses. DraftKings only counts shorthanded points, and also has a hat trick bonus.

Powerplay added bonuses are a small addition to your scoring, but still using players on powerplay lines are crucial, as we will get into that later on.

If you'd like to learn more about FanDuel, read our FanDuel Review with full site details. if you're interested in DraftKings, see our DraftKings Review. You can find their respective promotional offers here - DraftKings promo code & FanDuel Promo Code.

If you play other fantasy sports, Vegas is certainly the first place you start. With that being said, NHL is no different. Moneylines sit as a good indicator for goalie wins, while team totals indicate where to find offense. You will often see 5, 5.5, and 6 O/U, and then you can go towards the odds. For example, if Boston is involved in a 6 O/U game, and are -170 favorites, they will be a friendly team to target both goalie, and on the offensive side. If the line is closer to even, feel free to fire away on both sides.

Whether you are playing cash games or tournaments, starting your lineup with a goalie sets up the rest of your lineup. In cash games, your goalie is a crucial part of success. You want to find consistent goalies, who are huge Vegas favorites, while the opposing teams have low totals. There is no issue in paying up to a max-priced goalie in cash games, and you should be more often than not. In tournaments, you might be able to snag a backup in for the night against a weak opponent. Use Vegas as an indicator, if an $8,000 goalie has the same Vegas numbers as a $9,500 goalie, you can look to use them as a tournament option.

What Leads To Goals/Assists

There are numerous factors in what leads to points for players. Time on ice, what line players are on, and how many shots they generate. Lets take a look at Connor McDavid, who checks off a lot of boxes as a top fantasy player. We will also compare to his fellow center teammates. When looking at the chart below, time on ice and shots on goal generate points. While line mates have a lot to do with points too, you can see time on ice and shots on goal generate more points per game. We can find value when players jump up to a top two line and play alongside players like McDavid. This often is how you find the value. Comparing stats like these can also lead you to find guys with similar numbers for a cheaper price.

Matchups also play a huge factor in NHL DFS, and using things like DvP, Corsi, Shots Against, Scoring Chances Against, and Opposing Goalie Stats are all crucial to narrowing down who you want to use on a given night.

Correlation in NHL DFS is huge, and there is quite a bit that goes into it. First things first, you need to know who is on the starting lines. Hockey lines consist of four forward lines, three defensive lines, and two powerplay lines. Generally we like to shoot for the powerplay lines, and also the top two offensive lines. On occasion, you can sneak in a third line or mix in a defenseman from the second line for value. Finding players that play together on both even strength and man advantage lines creates an extra bump for those player's chances to hit their ceiling. dailyfaceoff.com is a site that's used often to look at lines. 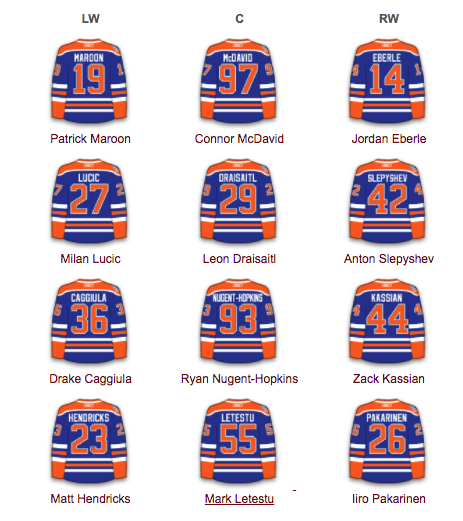