We enter a pretty ugly Week 10, and one where injuries need to be kept an eye on moving up until 1:00. It looks to be a heavy running back week, although Ezekiel Elliot was just suspended, at least for the moment. The Matt Forte news has already been adjusted, and Bilal Powell looks to be the chalk value here. With the lack of passing game options this week, RB has been made the priority while the optimizer soaks in some of the value created by suspensions and injuries. Premium access grants you the GPP and GPP Stack lineups and breakdowns. 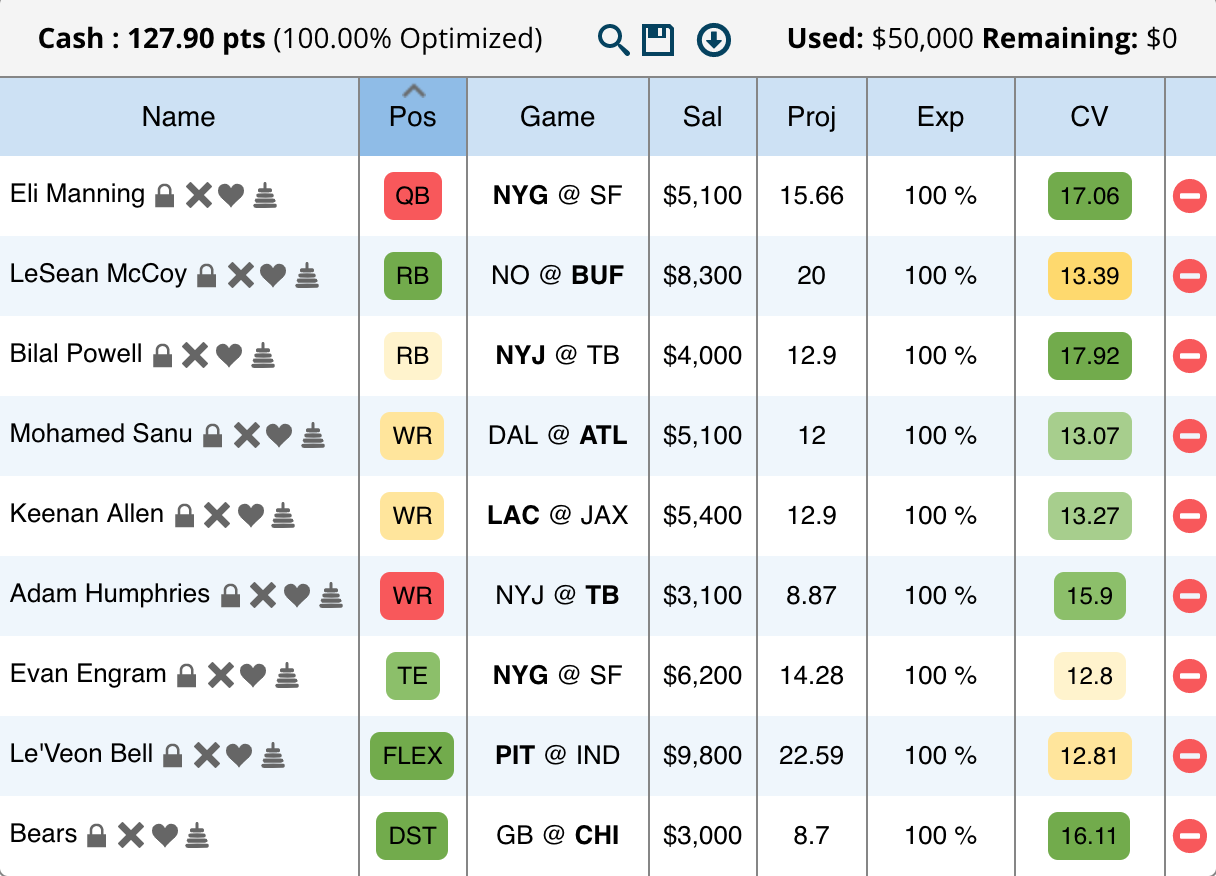 Hard not to pay down at running back this week with a few guys in good spot. Eli Manning and the Giants are a mess, but here we are looking to attack one of the league's worst defenses. San Francisco makes the Manning and Evan Engram stack pretty intriguing, given Engram should be dialed up for plenty of targets.

Picking one of the main running backs this week is a wise move, and picking two of them is even wiser. Both LeSean McCoy and Le'Veon Bell are in excellent spots this week, taking on two rushing defenses that have struggled so far in 2017. Both see a hefty amount of usage, and cost a decent amount, but the floors are fairly solid.

Matt Forte has missed practice again, and we are pretty much in gear for locking in Bilal Powell this week against a Tampa defense that is bottom five in fantasy points allowed to opposing running backs. Powell is dirt cheap and will see 18+ touches with Forte out.

Lackluster wide receiver core, but you could probably expect that this week. Adam Humphries is a strong bare-minimum play with Mike Evans out. Keenan Allen will actually dodge the main cornerbacks for Jacksonville this week if he runs his routes out of the slots, which is likely. He is a sneaky play, but wasn't someone that popped out at me this week. Mohamed Sanu continues to be used in Atlanta, so the production should continue against Dallas, who are mediocre pass defense.

Bears defense offers up the most Cafe Value this week at $3,000 so I will be firing away with this against a Brett Hundley led offense. The Bears have been a better home defense this season, and Green Bay has one of the lowest implied totals of the week.