Week 10 has a lot going on with the Ezekiel Elliot suspension finally coming, yet then again who knows. Julio Jones and Dez Bryant are both banged up and need to be kept an eye on. With a few weeks remaining, we are at a real standstill in terms of passing offenses go, which once again do not pop up much on this slate. FanDuel has some pretty clear cut values this week, that I was on, and I know the optimizer is on as well. We will have to keep tabs, but as of Friday morning, optimizer is rolling with these lineups. Premium access gets you the GPP & GPP Stack lineups and breakdown. 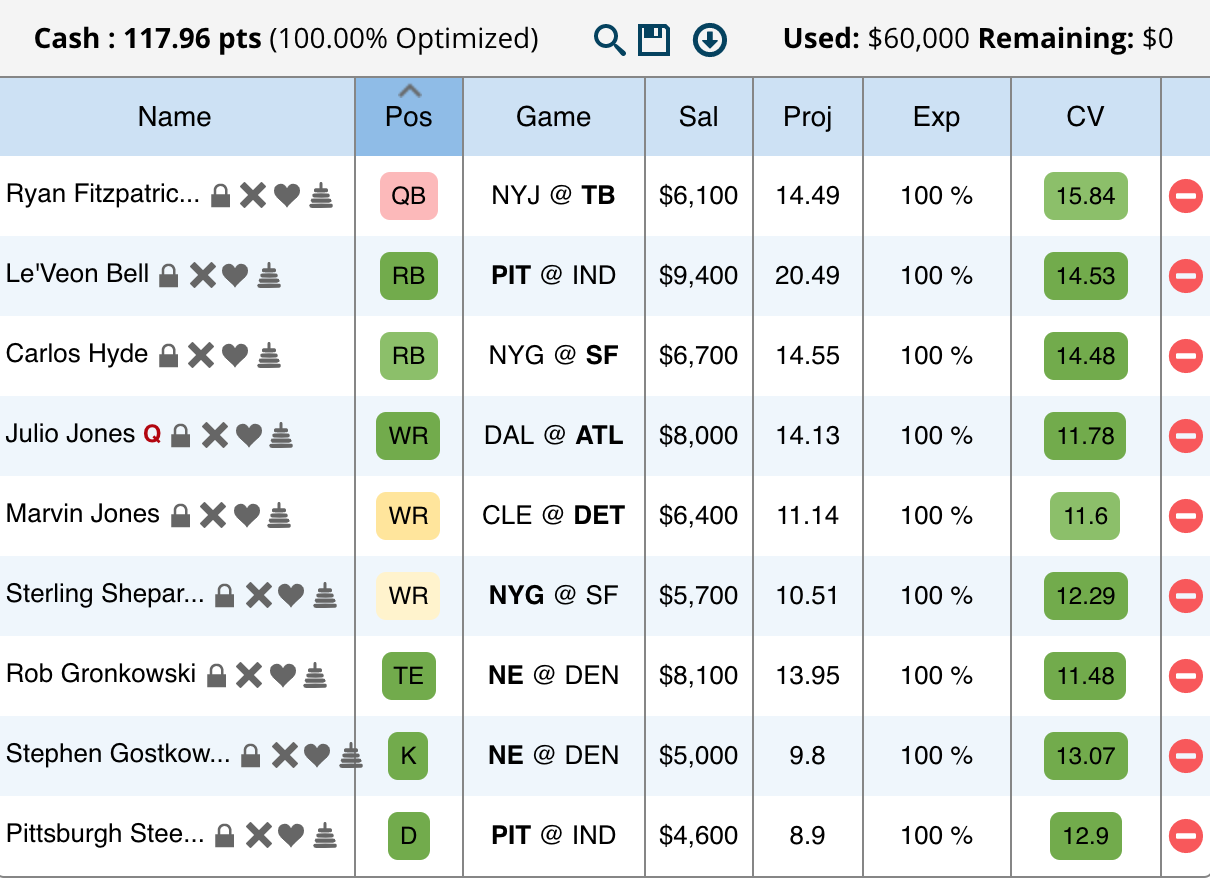 We won't pretend Ryan Fitzpatrick is a good quarterback, but at $6,100 he might be the best quarterback to grace the price tier. He gets a matchup against his former team, and while he is without Mike Evans, Fitzpatrick is still a very viable option. His value brings you to using Julio Jones, Le'Veon Bell, and Rob Gronkowski. He won't have to do much to hit value, and has plenty of potential for 200+ yards and two scores. This should be a low scoring quarterback week, so taking the bare-min play here isn't a bad choice.

I wouldn't mind using both running back spots to pay up here this week, but I can understand locking in Bell and using a value like Carlos Hyde. Bell is the top play on the board this week, in a big time matchup against the Colts. And by big time, I mean he should put up 20+ fantasy points here. Hyde has been used more as a wideout, but if he can get the 20 touch volume this week against a Giants defense that has given up, he is in a great spot.

Jones should play this week, but do keep an eye on him. He is in a good spot against the Cowboys, who did take a little hit in limiting offenses when Zeke plays. Jones is a mismatch for this secondary. Marvin Jones sees a tough matchup against Jason McCourty, but is worth a look at his cheaper price tag, especially if the volume of targets continue. He has seen 44 in the last two weeks. Sterling Shepard is one of my favorite wideouts this week, getting a mediocre San Francisco defense. Shepard saw nine targets last week in a tough matchup against Los Angeles, and it should be him and Evan Engram that pick up the slack.

Denver has allowed the second most fantasy points per game to opposing tight ends this season, and now will face on the of the better tight ends in the game. Rob Gronkowski is the pay up option at this spot, but as you can see costs quite a bit. With the savings elsewhere, I like this lineup construction. No issue with Stephen Gostkowski, nor the Pittsburgh defense against one of the poorer lines in the game.