After what seemed to be a dreadful Week 5 for many, Week 6 looks promising based on matchups. We have eight games with totals over 45, and some prominent passing attacks in good spots. As far as the optimized lineup construction goes this week, there was been a severe change in process from cash to tournament projections. This has been something that's rare based on my coverage of breaking down optimized lineups for DFC. 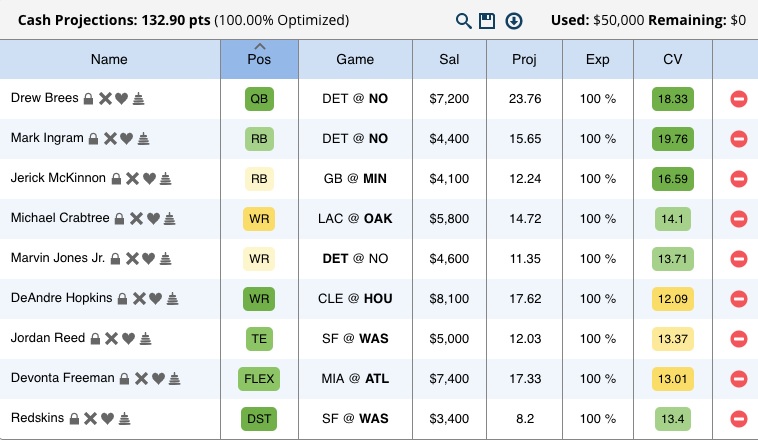 Cash projections are onto paying down at running back for the most part, and spending on a quality RB/WR/QB. Drew Brees gets a home matchup against Lions, which we remember as a gigantic dud last year when these two met, but I am willing to go back to the well with Brees getting a healthy dose of his weapons ready to go. Mark Ingram is paired with him, which I don't mind given his work in the red zone, and passing game. He has seen 15+ touches in back-to-back weeks and is a great value this week.

Jerick McKinnon is coming off of a great week, and the price tags came out after his Week 5 explosion. I am not getting crazy excited about him this week, but Green Bay ranks 20th in DVOA against the run, and are bottom half in fantasy points allowed. Devonta Freeman is an interesting choice this week, given he leads all running backs in touchdowns despite a Bye Week. Miami has been stout against the run, but Atlanta's offense continues to move the ball well, and Freeman tends to be the one finishing off drives.

Marvin Jones is an interesting wideout here, especially since I feel the $4,000 range is sort of dried up. If this game turns into a shootout, Jones should have some action, but I would not say he has the highest floor. Michael Crabtree also has a tough matchup against San Diego's Casey Hayward, so while I am not on him, the optimizer is. DeAndre Hopkins is certainly a top option this week, as Cleveland ranks bottom five in DVOA against WR1s, and his volume alone makes him a viable option each week.

When we get to Jordan Reed I still don't find it to be the most comfortable of plays, but $5,000 for a TE that can put up over 100 yards and a score is at least someone to consider. San Francisco has been decent against tight ends this season, but Washington is one of the top projected scoring offenses. Their defense is as well, and the optimizer saves a few hundred with them.