Week 7 opens up as a more eye appealing slate on FanDuel given the Falcons-Patriots game at the end of the night. It currently has a 56.5 total, while only two games go over 46 everywhere else. Dallas - San Francisco is the next highest game, while New Orleans - Green Bay is right there with it. Outside of that we are looking at a lot of yellow and red when it comes to the implied team totals this week. FanDuel lineup construction is a bit different from DraftKings this week, as we get more quarterback options in play with the night game, and the optimizer uses them. Premium access lists GPP and Stack lineup. 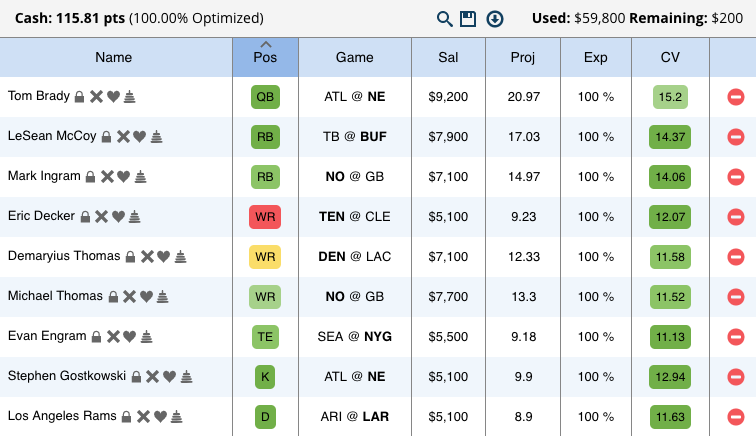 Love LeSean McCoy this week, in a home matchup against the Bucs. They rank 22nd in DVOA against pass-catching backs, and 16th against the run. McCoy has averaged 9.6 yards per touch this season, and is catching 5.4 passes per game. He is up over 20+ touches a game, and has faced some stout defenses. Mark Ingram is coming off of a big week, and with Adrian Peterson gone, it seems the Saints will rely on him and Kamara a good amount. Given the passing game is pretty week outside of Michael Thomas and the occasional Ted Ginn, they may rely on the running game a bit more.

The wide receiver core here is something I like quite a bit. Eric Decker is in the best spot among Tennessee's wide receivers, and is coming off a nice Week 6 performance that gives me some hope he can get back into a more fantasy relevant role. Demaryius Thomas should see a hefty amount of targets given Emmanuel Sanders is out this week. While Casey Hayward is a tough WR/CB matchup this week, he is a solid option in terms of volume. I doubt many will be on him as well. Green Bay ranks 22nd in DVOA against WR1s this season, and the Saints have a top five implied total on the main slate. I am more than comfortable plugging in Thomas and Ingram this week.

Evan Engram is a solid option this week, as Seattle ranks 14th against opposing tight ends, and Engram is averaging 6.8 targets per game, and with the WR injury situation in New York, Engram should keep up a bulk workload. I have a tough time pairing kickers with my quarterbacks, and while New England can put up 35+ points where they both pay off, my personal preference is to use another kicker. Rams defense is a bit expensive for me this week, and more of a tournament defense in my opinion.