f you haven't checked out our PGA Lineup Optimizer, it is now live and you can find it here: https://www.dailyfantasycafe.com/tools/lineupoptimizer/pga

For the Quicken Loans National, Colussus chose the following lineup to be the highest scoring. 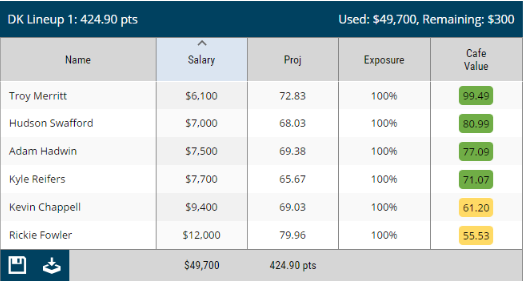 As the season has progressed, so has Coloussus. Each week we pull in more data, which creates a larger sample size for the current season to be compared to prior ones. Our projections have tightened and I think you will find Colossus a very useful tool going forward. Onto our Perfect Team for the Quicken Loans National.

Rickie Fowler: Coming off a missed cut at a US Open where many people had high hopes for him, Fowler now finds himself in a very weird spot salary wise. He has the highest price tag of the week by 2.5% over Patrick Reed, yet he has not made a cut in his last three tournaments, which by the way were the Players, Jack's tournament (Memorial) and the US Open. That is a big three week stretch during the season, in fact it is the highest paying three week stretch during the year. With all that said, targeting top-tier players when their stock is down is a huge GPP booster, and one of my favorite strategies to employ. Congressional is a driver and ball-strikers course with tough greens to boot, so considering Fowler is 5th in SG: Off the Tee, 28th in SG: Approach and 46th in SG: Putting, this could be the perfect week for him to break out of his slump.

Kevin Chappell: Chappell showed at the Players Championship that he is a player on the rise, completing his third 2nd place finish of the season in the process. His current form is strong, and his course history includes a 3rd place finish in 2011. As mentioned above, ball-striking will rule this week and Chappell is most certainly a ball-striker, sitting 7th in SG: Approach and 10th in SG: Tee to Green. His Achilles heal has been with the flat stick where he sits 177th in SG: Putting. Despite the tricky greens at Congressional though, Chappell's ball-striking, especially on the difficult par 4's (he sits 37th in par 4 scoring) will more than mask his deficiencies on the greens.

Kyle Reifers: At $7,700, Reifers is priced fairly on a week where that is hard to say about many players. He's had a great season thus far, recording four top 10's, including two within his last four tournaments, as well as a top 20 at the Memorial. He missed the cut last week at Oakmont, but that is a forgivable offense given his lack of major championship experience. In that department, Reifers has been excellent, making nearly 71% of his cuts (17/24), making him a nice cash game play, and a filler or glue guy in GPP's.

Adam Hadwin: At first I thought this is where Colossus and I would part, but after hearing (reading) him out, I'm starting to come around on Hadwin. He is coming off his best two week stretch of the season, finishing 11th and 22nd at the Memorial and Dean & DeLuca. His price is somewhat inflated at $7500, and with only one top 10 on the season it is hard to justify 30th place as upside for a player in the mid 7000's. A deeper dive would reveal that Hadwin is a resourceful fantasy player. He's made 15 of 20 cuts and sits 41st in birdie average, which has allowed him to average 60.1 FPP's per tournament, a higher average than Kyle Reifers who has four top 10's and a similar cuts made percentage. He is a GPP sleeper and one that should fall through the cracks.

Hudson Swafford: Swafford is playing his best golf of late, surviving five consecutive cuts starting at the Players Championship. From tee to green, Swafford is statistically sound, sitting 28th in SG: Off the Tee and 94th in SG: Approach, while also showing promise with the putter at 64th in SG: Putting. Swafford owns some good mojo at The Quicken Loans, finishing in 11th place. Congressional is a course that plays LONG (more than its 7500 yards listed) and Swafford is 5th in Driving Distance, so he will own a significant advantage over a very weak field. He has only one top 10 on the season, but this is a week where I could see him racking up his 2nd.

Troy Merritt: Sorry Colossus, but this is my stop. For those who consider tournament wins on courses different than the one being played, then Merritt might be your guy. He took home his first win last year at the Quicken Loans (where it was played at RTJ GC) and he did it in style by shooting a course record 61 and holding off Rickie Fowler along the way. Merritt is a super athletic guy who just hasn't quite figured out all the golf stuff yet, which is why he is so inconsistent and really hard to recommend him...even at a tournament site he's won and at the low-low price of $6100. He is a fantastic ball-striker, so I can see playing him as a GPP flier. As far as making the cut goes, good luck...prior to his win last year, he had missed five straight cuts at The Quicken Loans. They call it Boom or Bust for a reason. If you are looking for a pivot, I'd suggest Tim "You Broke My Heart at Muirfield" Wilkinson, who had been playing great golf up until the week he was touted by every expert in the industry. Spoiler Alert: That never goes well. This week should go better for Wilkinson though, counter intuitively actually, as Wilksinson sits in the 182nd in Driving Distance. On the flip-side, he is 16th in par 4 scoring, 23rd in Par 4 Birdies or Better, and even more importantly, 24th in Proximity on Approach Shots from 175-200 yards (where he may find himself frequently) and 2nd from 150-175 yards. I expect his ownership percentage to be very low as well.