For the Players Championship, Colussus chose the following lineup to be the highest scoring. 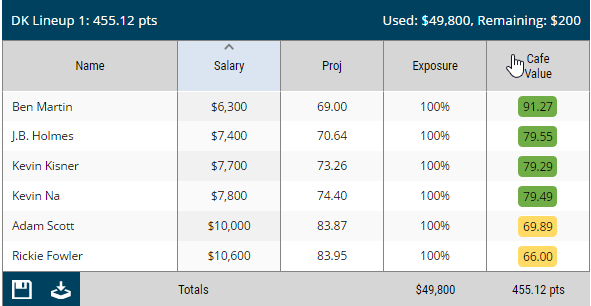 Rickie Fowler: Not a hard choice to anchor your Players lineups, Fowler did something no player had ever done last year at TPC Sawgrass. Fowler finished birdie-eagle-birdie-birdie to force a playoff with Kevin Kisner (another Colossus choice) and Sergio Garcia, before winning the playoff with a birdie at the island green 17th. Fowler had a great chance to log his first win in 2016 last week at the Wells Fargo, but was outlasted by an ambitious James Hahn. He has a T2 in 2012 at the Players, and also has seven top 10's in 2016.

Adam Scott: In 2004, Scott became the youngest player to win the Players at just 23 years old. Since then, he has had mixed results, but nothing noteworthy as of late. Lucky for him, he has enjoyed a successful 2016 season, including winning back to back events. Stats and metrics have shown that ballstriking has not been the qualifier for success as of late at the Players, but still, Scott has the perfect game to succeed at TPC Sawgrass. His putting faltered this past week at the Wells Fargo, but considering his price at $10,000, you cant go wrong with Scott this week, especially as a secondary anchor. I will be more exposed to Sergio Garcia as opposed to Scott, but there in lies the rub. Garcia has a victory at the Players, and a number of top 5 finishes, but if you had to pick one to win a high profile event, Scott would be my pick.

Kevin Na: A perfect choice in the middle of your lineup, Na has three top tens in his last six appearances at TPC Sawgrass. Na probably won't win the Players, but we really don't need him to at $7800. He sits 12th in Strokes Gained: Tee to Green, which indicates he has the type of game to have continued success at Sawgrass.

Kevin Kisner: Kisner has a small sample, with him only competing once at TPC Sawgrass. He made the playoff with Garcia and Fowler in 2015, and showed he had the moxie to compete on the biggest stages. His 2016 season has been up and down, the ups include a win at the RSM Classic, and a 2nd place at the WGC-HSBC, which is nearly as good as a win when you factor in the competition. He is a player on the rise, and his price is so soft considering his success at Pete Dye courses. I will have heavy-heavy exposure to him this week.

Ben Martin: Martin will either be a super popular pick, or players will see through his success last year and label him an aberration. He's played Pete Dye courses well throughout his career, and at $6300, he is a bargain that could very well come through with a top 10. The downside is a missed cut, but in big GPP's, that is a gamble I am more than willing to take. The sample size is very small on Martin, with him only competing once at TPC Sawgrass, but that also speaks to his ability to tame a course that has given a lot of good players very frustrated in the past.

JB Holmes: This is a matter of preference, as Holmes lands in an interesting spot price wise. Danny Lee and Bill Haas seem like better fits at TPC Sawgrass, especially Haas with his previous success at TPC Sawgrass, which includes a top 5 in 2016. Holmes has two top 10s at the Players in his last six tries, but he also has three missed cuts. His game is an interesting fit at the TPC Sawgrass, as his driving distance is often equalized by the layout, and it is no longer a bombers course. What matters is birdie conversions, and Holmes sits 13th in birdie average. He's a boom or bust pick, and probably doesn't deserve heavy exposure. With that said, at $7400, he will be the guy players point to as a missed opportunity if he happens to net another top 10.