The allowance of stacking is one of the major differences in DraftKings MLB product compared to other sites. For those that aren't aware, stacking is playing the majority of the hitters on your DraftKings lineup from the same real life team. Many other sites, including FanDuel and DraftDay, limit users to selecting four hitters from a team, while a few others simply limit to five total players from any team. This has been a hotly debated subject in the daily fantasy sports industry as some people feel it takes the skill out of the game, while others feel it adds a nice wrinkle and differentiating factor to DraftKings MLB product.

There are multiple reasons stacking can be beneficial, most of the time, these reasons occur in tournaments rather than cash games. The correlation between players in MLB is dramatically higher than other sports as baseball players overlap stats, such as RBI and runs more than, for instance, NBA players do with points and assists. If a player hits a home run with two of your other players on base, the correlation leads to a huge increase in points. On DraftKings, if you simply own the player who hits that three-run home run, you get 14 fantasy points (FPs). However, if you owned both players on base, you already would have received at least five points from them plus two extra runs scored, for a total of at least 23 FPs. This is pretty obvious but still worth pointing out. Now, let's look at some good reasons to pick a team to execute this type of stack with.

The first, and most common instance, is stacking a team that's simply projected to score a ton of runs that day. Most players use Vegas Sportsbook lines to get a feel for this. A team total of at least five is recommended. As mentioned above, this is a more common practice in tournaments. To justify a big stack in cash games, the run total would have to be insanely high, as the variance of a large portion of your players being on one team is simply a huge detriment in cash games.

A perfect example of this last season was the Oakland Athletics, who littered their lineups with left-handed hitters every time they faced a right handed pitcher and it increased their runs per game by almost a full run against righties. The best way to utilize this stack is by playing the most correlated lefties, the ones who are hitting near each other in the lineup.

The most common stacking practice is to stack the opposing team that's playing in one of the better hitters' parks, such as Colorado or Texas. Most of the time, the hitters who play their home games in these parks have their prices already inflated due to park factors and therefore are hard to stack, so the opposition becomes the easy target because of their softer pricing. Weather should also be considered under this type of stack as targeting a right-handed heavy team in a stadium where the wind is blowing out to left field can be a great stack as well, with the opposite also being true for lefties.

As mentioned in ballpark factors, stacking a team that's under priced as a whole for one reason or another can lead to great success. If you can stack a bunch of players, correlated heavily, whom are all under priced, it can allow you to load up the rest of your roster, especially at the pitcher position on DraftKings -- where you need to draft two.

The “full stack" is only allowed on DraftKings, and even that isn't a true full stack. You are still only allowed six hitters from a team, so you have to leave three players from the team's lineup out. Choosing your six players from the team you choose is the tough part. Choosing them from the top of the lineup is generally the smart, but also the expensive play. Just like when choosing any single player, the guys at the top of the order simply get more plate appearances. For tournaments, the full stack is a really common one, whether it's stacking the highest-scoring team, or the lowest-scoring one in order to be one of the few who has that stack if the team scores a ton of runs that weren't expected. 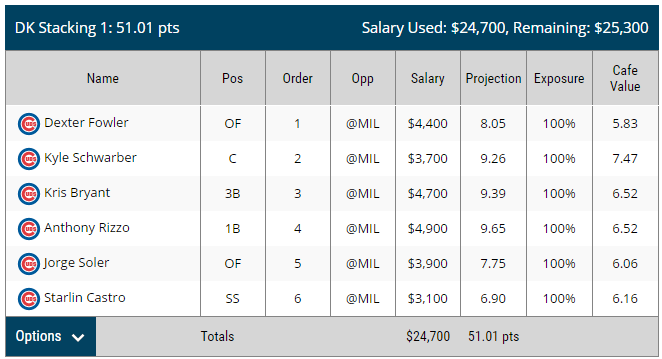 A mini-stack consists of just a couple players, usually two or three. Most often, these stacks include players from the meat of a team's order, such as the three, four and five hitters who are often a team's best hitters and are highly correlated to the team's total runs scored. Another common one is the top third of the order, but that's not a favorite of mine as it leaves out the cleanup hitter, who is often the teams most statistically productive in the power categories, something we are always looking for in daily fantasy baseball.

At times, due to pricing, it becomes tempting to use a stack that starts at the bottom of a team's order and continues through the top. This is more common with AL teams because the pitcher isn't hitting ninth in this situation. However, for the price discount, you can be giving up a decent number of plate appearances, making this a somewhat more volatile stack.

This is a very common tournament play on sites that only allow 4 hitters from a team. Playing a double-stack of two teams expected to score a lot of runs is a nice hedge against loading up on just one of them, as it gives you the potential to get highly correlated scoring from two teams. However, it's hard to afford the best players on two teams, especially on FanDuel, where you're only required to draft one pitcher. It's generally a good idea to spend up at pitcher on FanDuel. Finding a lower priced stack to pair with one of the better ones of the night is key, unless you plan to take a risk with a cheap pitcher. 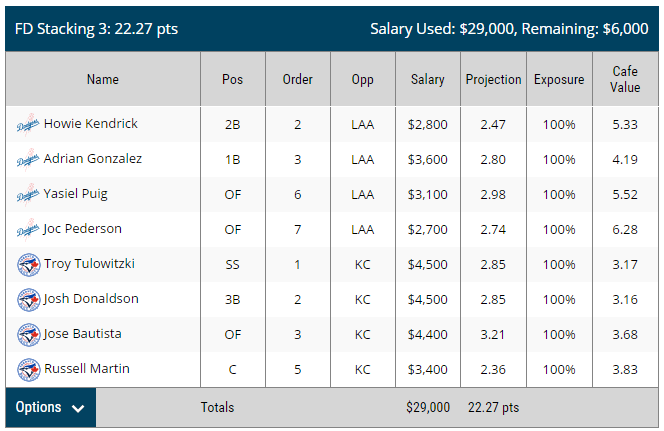