NFL DFS is all about creating opportunity for all of your players. As we increase the amount of opportunities the players on our daily fantasy teams have, we also increase the likelihood of us having an above average lineup.

In this article, we will discuss and show the key relationship between the amount of carries a running back receives per game and his output. While this seems like a fairly easy concept, it shouldn't go underappreciated due to the overwhelming numbers I will uncover.

Carries Per Game vs. Touchdowns 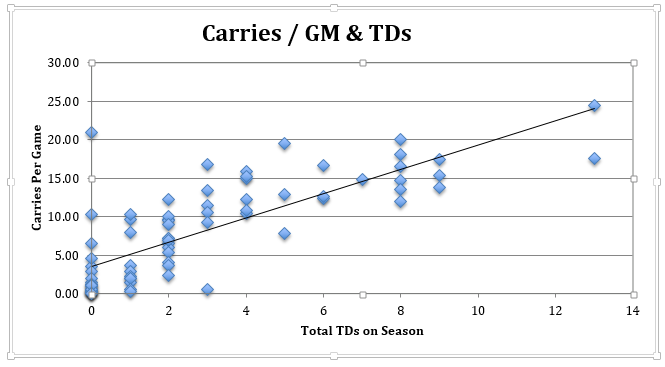 As previously discussed, a key component to your running backs success is their ability to score touchdowns. While it may be “cute” to select a flashy, running back that is known for big plays, this isn't going to be the most consistent method.

As noted in the graph above, there is a distinct relationship between the total carries a running back receives per game and the amount of touchdowns they score on the season. The reason I look at the amount of touchdowns scored for the season is because NFL is a short season and we want to look at it as a whole. If we are targeting the best plays every single week, we will ultimately create the most amount of touchdowns for us over the course of an entire season. As previously noted, the week-to-week variance of NFL is extreme, yet we can limit these peaks and valleys by being consistent throughout the year. There is no better way to prove touchdown consistency than by targeting players who receive the most carries per game.

Carries Per Game vs. Yards Per Game 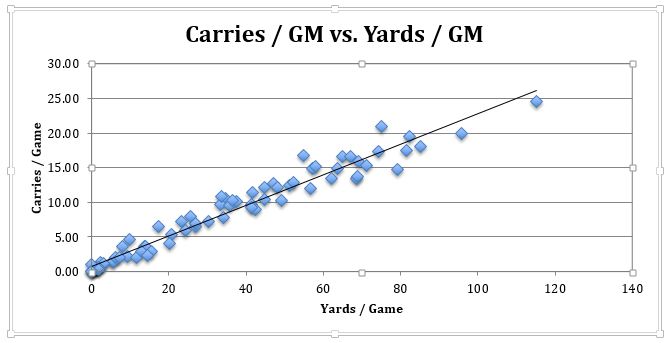 We just discussed a very strong, positive correlation between carries per game and touchdowns scored during a season. There is a bit of noise in this as we have to spread out touchdowns across an entire season to take advantage of the edge or else we will be deciphering between one-tenth of a point for players.

While this is an extremely strong correlation, the relationship between carries per game and yards per game exceeds that. The correlation is .98, which means it is two-tenths away from an absolute perfect correlation. This is extremely important to understand, and I will tell you to go back up and look at the graph before continuing.

A correlation between stat and performance can help us become better daily fantasy players and identify situations that can be valuable for our bankroll.

When we have a near perfect correlation between running back yards and carries we need to truly examine the amount of carries a back receives. At face value, this may seem like an easy task and yes, it absolutely is. Targeting the likes of Demarco Murray and Matt Forte will lead to more carries and more yards but will also require you to pay premium salaries.

A great way to use this stat is targeting dual workload backfields. Players are priced by their performance, if they are sharing the workload with another back, their performance is theoretically going to be split into two which will be resulted in their salary.

If we can identify situations where a back in a dual backfield will either become the sole workhorse or gain a significant amount of carries, value is increased as well as a correlation between that running backs success.

We have identified two very strong correlations that must be taken advantage of when identifying which running backs to target on a weekly basis. By utilizing these statistics and pairing them with other factors such as Vegas odds, defensive matchups, weather conditions and others you can greatly increase your running backs upside and floor while increasing your bankroll.

Stay tuned as we discuss similar metrics to measure quarterback and wide receiver success to help you start and finish the NFL season strong.