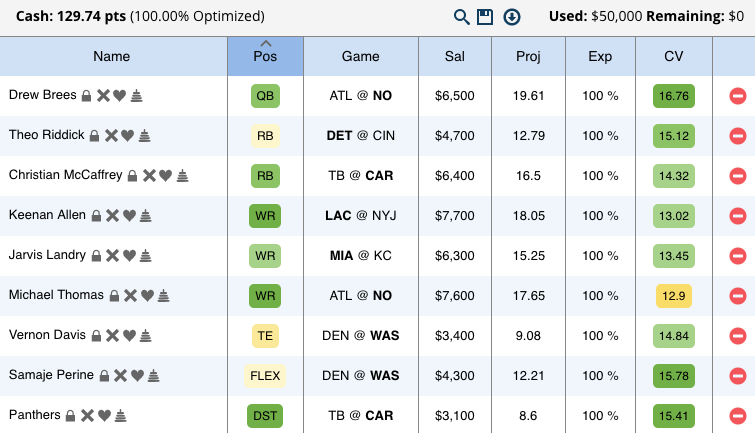 Coming over from FanDuel, it is weird to see the New Orleans passing game be the focal point of the cash game lineup, while both Alvin Kamara and Mark Ingram were in the cash game lineup on FanDuel. Now $6,500 is appealing for Drew Brees, but the upside and floor has been fairly mediocre this season. New Orleans has a 30 implied team total at home, so Brees should able to get his and surpass value.

We have a few pass-catching backs here this week, as Theo Riddick and Christian McCaffrey pop up in the optimal lineup. Riddick's injury isn't serious, as he practiced in full this week. The Bengals rank 17th in DVOA against pass-catching backs, allowing 57.6 yards per game. Riddick is in play at $4,700, and should see 15 touches this week against a Bengals defense that has given up. McCaffrey is coming off of a big week, and this Tampa defense is nothing to worry about. Even at $6,400, McCaffrey is someone to consider. Tampa Bay ranks 23rd in DVOA against pass-catching backs and 21st against the run. Samaje Perine at $4,300 is in a tough spot this week, as Denver ranks 2nd in DVOA against the run, and allow the 5th fewest fantasy points to running backs. Perine has had a full workload of this week, but putting two Redskins players in my cash lineup isn't ideal.

DraftKings loaded up on wideouts this week as Keenan Allen, Michael Thomas, and Jarvis Landry round out a pretty strong receiving core. We can start with Allen who was carted off last week, but the injury doesn't seem to be as serious as it seemed. Allen had a tremendous run before last week, and gets a Jets defense that is bottom five in fantasy points allowed to opposing wideouts. Jarvis Landry is an excellent play this week, as Kansas City allows the fourth most fantasy points per game to opposing wideouts Landry has seen 36 targets over the last four weeks. Michael Thomas had a couple of touchdowns called back last week, but finally got his. Thomas has come around of late, and Atlanta ranks 21st in DVOA against WR1s.

If you are playing matchups this week, Denver allows the fourth most fantasy points per game to opposing tight ends, and ranks 26th in DVOA. Vernon Davis isn't appealing to me this week given he has just six receptions in the last three games and hasn't topped 30 yards receiving in four games. Panthers defense is a nice bargain this week, averaging 11 fantasy points over the last five games.