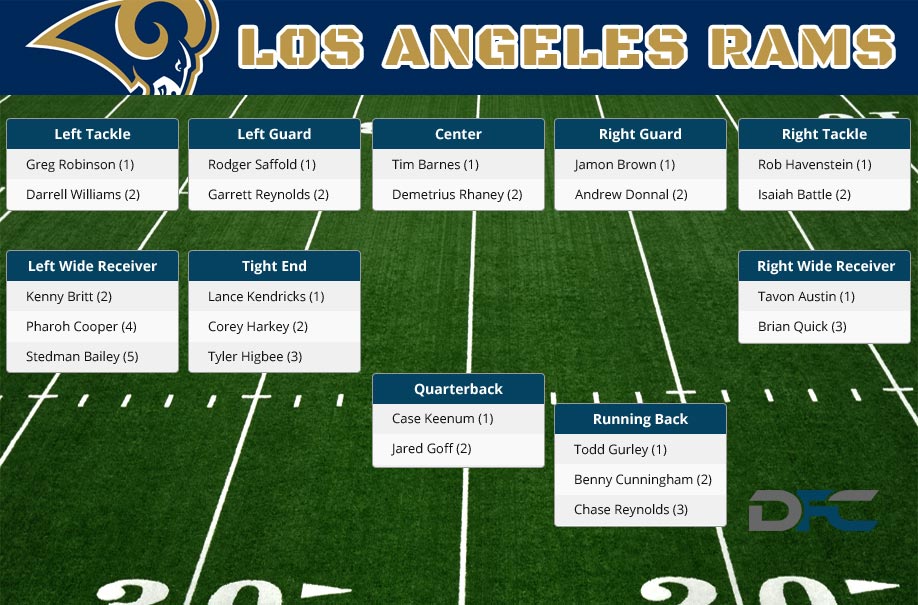 
The Rams head into 2016 with more promise than arguably any other season in the past decade. They have a second year workhorse running back in Todd Gurley who ran for 1100 rushing yards in limited action coming off a torn ACL, a strong defense with multiple pro bowlers, and most importantly, the top pick in the 2016 NFL draft, Jared Goff. Goff is a touch passer who was the only Cal Quarterback to start as a true freshman in school history(Yes, that includes Aaron Rodgers. Very Precocious. By the end of his college career, Goff had racked up a very prolific college career. With that understood, in year one, you can expect low-end Alex Smith-ish numbers.

As mentioned above, they have Todd Gurley as the focal point of the offense, and have yet to establish a top target in the passing game. 15 to 20 touchdowns and 3,000 to 3,500 passing yards is Goff's most likely range of outcomes, which is great for a weekly QB2, and potentially a DFS steal in good matchups.

The most to gain from non-horrific quarterback play is Tavon Austin. The fourth year wide receiver really found his stride with the ball in his hands last year, but because the Rams had the worst quarterback situation in the league last year, he ended up doing most of his damage on the ground instead of through the air. If Goff can find any sort of traction in 2016, he should allow Austin to flourish in a weekly flex role for DFS purposes, and potentially rack up some strong volume in the pass game.

In terms of players to potentially emerge, it's a tough group to project. With tight ends normally emerging later in their careers, it's tough to see rookie Tyler Higbee gaining much traction or beating out Lance Kendricks for the starting role, especially with a rookie quarterback that needs trust. Pharoh Cooper was an extremely productive college receiver at South Carolina, and could bring some year one stability, at least as a short yardage/screen game. If they do decide to put Tavon Austin out wide more often, a reasonable amount of targets and opportunity could open up for Cooper in the slot. Though you should temper expectations in a redraft/DFS type of way, Cooper is one to watch as the season progresses.