Oakland finished in the basement of the AL West last season, and that is likely where you will find them this year. This is a team full of platoon bats and young arms, which has always been Oakland's style. When they have something good, they trade them away. Oakland lost Danny Valencia this offseason, and grabbed Trevor Plouffe and Rajai Davis. Oakland serves a purpose in DFS, and that is value platoon bats. We will likely see that with guys like Rajai Davis and Matt Joyce. Sonny Gray continues to battle injury, and his 2017 is not off to a good start. However, the arms of Sean Manaea, Jharel Cotton, and Andrew Triggs are all young arms on the horizon.

Unless you are Khris Davis, O.co Coliseum is a place that limits power from both sides. The Coliseum ranked 28th in runs, and 29th in home runs. This is a major pitcher's park and always has been. Left-handers had plus park factors for extra base hits, while it was near average for right-handed bats. The rotation allowed 4.3 runs per game here last season, while allowing 5.1 on the road. With the young arms here, they will enjoy this place. The offense won't. They scored the second fewest runs in the league per game, when at home. On the road they ranked 12th. O.co simply kills offense, so don't expect to find much.

The A's have always had a knack for churning out young arms, and that looks like it will be the case this year. Sean Manaea and Jharel Cotton are intriguing young breakout candidates this season. This is good news, given Sonny Gray is set to start the year on the DL, after battling injuries last season. Kendall Graveman isn't a fantasy worthy arm either. These arms all have the benefit of pitching in Oakland, but as well as other friendly ballparks in the division.

Manea is going to get the most hype out of the Oakland rotation. Manaea's second half was terrific, allowing a .276 wOBA, compared to a .338 wOBA in the first half. His strikeout rate jumped a good 4%, and while his walks were not much of an issue, he lowered those as well. With an 11.8% swinging strike rate, there is a lot to be desired.

Cotton has about league average style stuff, and likely will find himself in up and down starts. He had an 11 K/9 last year in the minor leagues, but isn't considered to be a major strikeout pitcher. Projections have him right around 8.5 K/9, which is certainly fantasy worthy. Cotton has gained command over the last season, and had a 2.15 ERA over five starts in Oakland last season. He allowed a home run in four of the five starts, and with a 37% groundball rate, that is something to note when going into hitter friendly parks.

Oakland once had a top of the rotation guy in Gray, which fizzled out in a big way last season. His downfall was likely tied to injuries, which are reoccurring early on here in the Spring. It will be best to keep an eye on him once fully healthy. 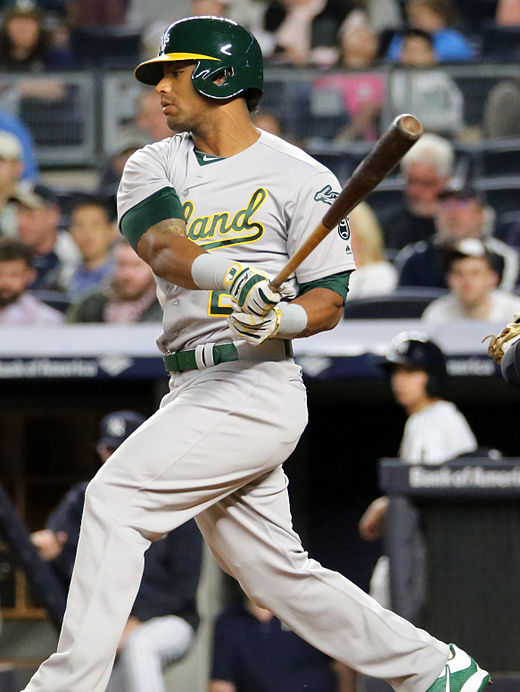 Oakland plays in one of the worst hitter parks in baseball, and have an offense that will definitely be below average again this season. Khris Davis is the only standout name here from last season, who hit 42 home runs, and drove in 102 runs. He has a high strikeout rate that comes attached, but it is enough to overlook if the power is there again, which it should be. 40+ homers will be tough to duplicate, but 30+ should be there.

Ryon Healy hit .305 last season, over 283 plate appearances. He also slugged 13 home runs, which is impressive over that time span. At a .352 BABIP, a .300 average is unlikely to repeat, but .275 or so seams reasonable. Healy has added some pop to his game, and in a full season, he should hover around 20 home runs.

The A's lost Danny Valencia, but have a couple of platoon bats to note against southpaws. Marcus Semien is an everyday shortstop, and had power against both hands, yet did carry a .257 ISO against southpaws last season. Jake Smolinski has a career .371 wOBA and a .214 ISO against left-handers, and will occasionally find himself in the lineup against them, but is a fourth outfielder in Oakland. The addition of Rajai Davis adds speed to the top half of the lineup. He stole 43 bases last season, and also has a decent track record against lefties.

Matt Joyce will likely double his plate appearances from Pittsburgh last year, where he had an insane 20% walk rate. While he hit just .242, he had a .403 OBP. He did carry some power against right-handed pitching, with a .234 ISO. At most he will be a cheap GPP bat to toss in against weaker arms, and in good ballparks. Stephen Vogt saw a drop in ISO last season, going from .182 to .155. While Vogt holds close to our hearts, he probably won't be the reliable play he was in 2015.