Well, it was finally the big cash I felt was brewing for weeks on Draftkings for the Byron Nelson Championship over the weekend. One lineup in particular performed the best for me, and it featured four golfers from the Pin Seeker column. Below are my GPP results from Draftkings. 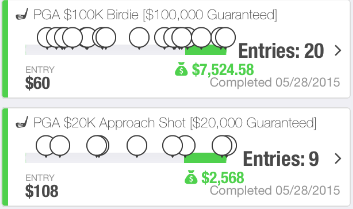 The weekend was a dream scenario for me, that will be very hard to replicate again, but testing out different strategies over the past couple months paid dividends finally. The four players from the Pin Seeker in my lineup were Brooks Koepka, Jimmy Walker, Daniel Berger and Charley Hoffman. Hoffman, Koepka and Berger all exceeded their price tags by a solid margin, proven to be the smart value plays I thought they would be. Walker wasn't cheap, but I figured he would be lower owned, and he was between 15-17% owned in both tournaments. His eagle on the 16th was over a $4,000 swing alone, and really highlights the importance of players who score well on par 5's week to week. The final two players on my roster were Danny Lee and Tony Finau, both players I liked but who thought would be severely under owned due to their inflated price points. Lee finished four shots behind both Berger and Finau, but outscored them by making an ace, three eagles, and a lot of birdies during the week. Hoffman was highly owned as expected, but that doesn't mean you had to fade him to win a GPP. A strategy I like to employ here is to actually take the player you expect to be highly owned, and play him with players around his price point that you like, but also think will be overlooked by your competition. There will be more data driven articles posted on here over the next few weeks that will look at things like scoring, GPP strategy etc. so look for those.

This weeks stop is at Jacks' tournament, the Memorial at Muirfield Village in Dublin, Ohio. Looking at recent winners here, Matsuyama, Kuchar, Woods X5, and Rose, it's clear that the well rounded games of the worlds best will be featured. Being an invitational event, only 120 spots are available, yet 70 still make the cut, a higher percentage that usual. This makes me feel even better about loading up on the higher priced names, with the scrubs more likely to actually make the cut and return some value. Draftkings is running a mega tournament this week, a $3 GPP with a 1st Prize of $100,000. DFS golf is growing at a ridiculous rate right now, and these kinds of tournaments are only going to become more normal. Muifield Village will test every club in the bag, with 79! bunkers and water everywhere, golfers are going to have to avoid the trouble areas at all costs. If you're trying to pick a tournament winner, don't look too far outside the top 30 in the world golf rankings.

As I already mentioned, a well rounded game is going to be key this week, and the first stat I'm focused on is Scrambling (SCR.) Seven of the past eight winners have finished the year ranked in the top 50 in scrambling. If you're going to get into trouble, I want to be backing guys I trust can get up and down for par more often than not. While it won't be one of my key stats, strokes gained putting is one to never overlook, and this week I'm putting extra emphasis on it. Seven of the past ten winners have been in the top 50, with Matsuyama being the only outlier last year, but when you're sticking everything to five feet, putting gets much easier. My second key stat will be par 5 scoring (P5S), as 13 of the past 15 winners have been in the top 50. Along with par 5 scoring, look at eagle %. That extra five points compared to a birdie is always a great way to shoot up the leaderboards. The last key stat will be strokes gained tee to green (T2G,) as ten of the past eleven winners have been in the top 50 at years end. No surprise there, as T2G is always littered with the games best. Other stats that have been predictive to success at Muirfield over the years include par 3 scoring, par 4 scoring and proximity to the hole.

Hideki checks every imaginable box this week, and hasn't finished outside the top 25 since February. Being the defending champion will drive his ownership up, but he's a safe play with huge upside. GPP Ownership guess: 20-25% Pivots: Justin Rose, Dustin Johnson, Matt Kuchar

Fantastic price point this week, and one of the best scramblers on tour. If you like to gamble, throw down a punt on him with your local Johnny Knuckles at anywhere in the 40-1 range. Cash game staple this week who could win the tournament outright GPP Ownership guess: 23-28% Pivots: Kevin Kisner, Kevin Na, Billy Horschel

Spieth is on here every week, but you can't deny the stats or the run he's been on this year. I wouldn't use in cash games, but he's a must have in GPP formats, fade at your own risk. Leads the tour in Par 4 Scoring. GPP Ownership guess: 21-26% Pivots: Dustin Johnson, love him this week and hopefully will be in 10-15% range

I will be fading public heartthrob Rickie Fowler, as I don't see him winning the tournament to return his value. I like almost every other player around him in his price range. I will also be limiting my exposure to Jason Day, as he's dealing with some weird health issues. Finally, we can't go the entire column without bringing up El Tigre's return to action. I don't like his price tag, but I will definitely be throwing him in a few linueps, as he's won here five times and could always turn back the clock.

ArtVandelay10
thanks Sam ! To add on Koepka, leads tour in Eagle %, must play in cash imo