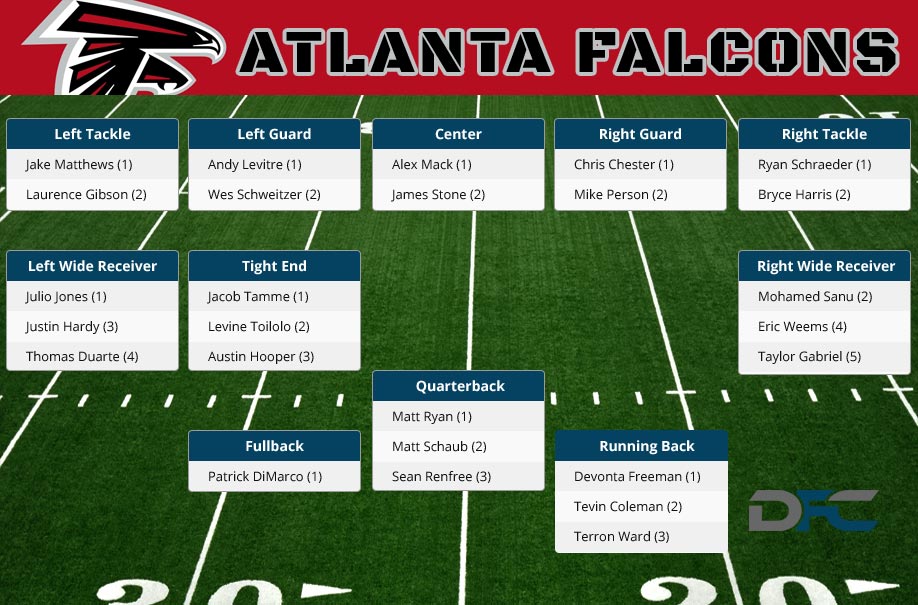 Matt Ryan will once again lead the Falcons into battle offensively this year. Ryan has been with the Falcons for what seems like forever, and while the days of Tony Gonzalez and Roddy White are behind us, there's also some new, emerging weapons.

At running back, it's fairly simple. Devonta Freeman is the main running back in the offense, in both receiving and rushing. He displayed tremendous consistency in games played in 2015, and the only thing that slowed him down was injury. Tevin Coleman is a significant back up, and should be able to provide solid rest for Freeman when he gets tired, but there's no debate between who will get the most touches. Beyond that, there isn't anyone to take significant touches.

There's no secret who the passing game is going to be funneled through, Julio Jones is arguably the best wide receiver in the NFL. Jones should command high end top wide receiver targets, and the rest should simply be subject to the trickle down effect. The Falcons signed now former Bengals wide receiver Mohamed Sanu to a deal this offseason, and he should take over the second receiver role. This should be a significant upgrade over the Roddy White/Leonard Hankerson combination that was there last offseason. Second year players Justin Hardy is likely to jump into the slot and help out on underneath routes.

Tight end is actually the most interesting position, that hasn't quite solidified itself yet. The Falcons drafted former Stanford tight end Austin Hooper in the third round of the draft his offseason, and he is likely to eventually take over. But, based on how teams have historically treated tight ends in year one, Hooper might have a long road to snaps in 2016. Jacob Tamme is the veteran presence at the position, and is most likely to be the trusted target for Matt Ryan in the passing game.