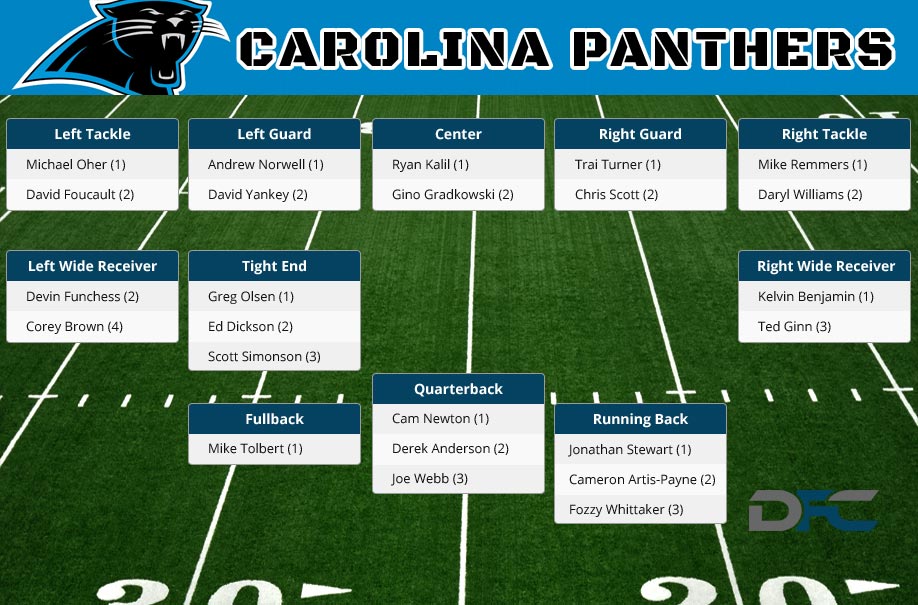 Cam Newton Leads the charge at starting quarterback. He obviously brings immense potential and is the key to what makes the Panthers offense work. If he goes down, they're in big trouble

On to running back, It appears Jonathan Stewart will once again have the role as the starting running back, and he doesn't have much competition. Mike Tolbert will once again be a goal-line vulture, but nothing threatening from a total touches standpoint. Second year former Auburn running back Cameron Artis-Payne was a fifth round draft pick last year and should only have a real chance at touches if Stewart were to go down.

Wide receiver gets really tricky, as they're a much more talented bunch than in previous seasons. Kelvin Benjamin is likely to reclaim his role as the high volume deep-threat as he recovers from a 2015 torn ACL. Ted Ginn should still be involved in a lower capacity deep threat role, but his speed should still provide some weekly miss-matches for secondaries. Devin Funchess is reportedly impressive in OTAs and is expected to make a big jump as an intermediate target in year two. Corey Brown will shift around in spot-start duty if anyone was to go down.

There's no questioning Greg Olsen as the top tight end option in the offense, and should have a stranglehold on the top target-share at the position.