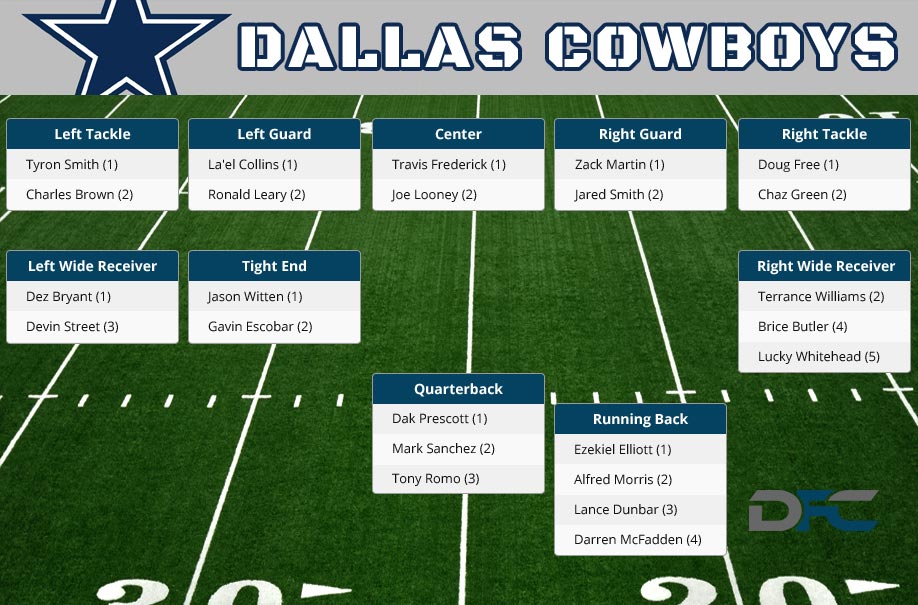 Tony Romo is back and healthy again, and the Cowboys are thankful, because they don't have much behind him. Romo's injury was a bit fluky last year, and with his collarbone fully healed, he shouldn't be at much risk for re-injury. He is the guy and they don't really have a backup plan.

While there was much debate over whether Ezekiel Elliott was worth the number four pick in this years draft, there's no debate that he's the clear feature option in the option. Elliott was a feature back in Ohio State last year, and while it's a transition to the NFL, it's clear that Dallas is going to hand him all he can handle in terms of touches. Beyond Elliott, Darren McFadden is still in town. He played very well down the stretch and would be in line for a feature role if Elliott were to go down, and will get inconsistent touches throughout games, even if Elliott is healthy.

Dez Bryant is healthy once again and should fit right back into the offense as the featured receiving option. He dealt with a foot fracture that ended up ending his season in 2015, and wasn't healthy even when he did play. He should get above 130 targets and be a main red-zone threat. In terms of secondary options Terrance Williams is second in line for wide receiver targets. He's entering his heading into his fourth season, and should end up with pretty similar numbers that he had in his first three seasons. Cole Beasley will once again be the third receiving option in the slot role. Brice Butler is intriguing but likely wont see that many targets as the fourth receiver.

Jason Witten is once again in a strong position to be a tight end one. He's the clear top option on the depth chart and will garner most of the snaps once again. James Hanna and Gavin Escobar should battle it out for snaps in two tight end sets.