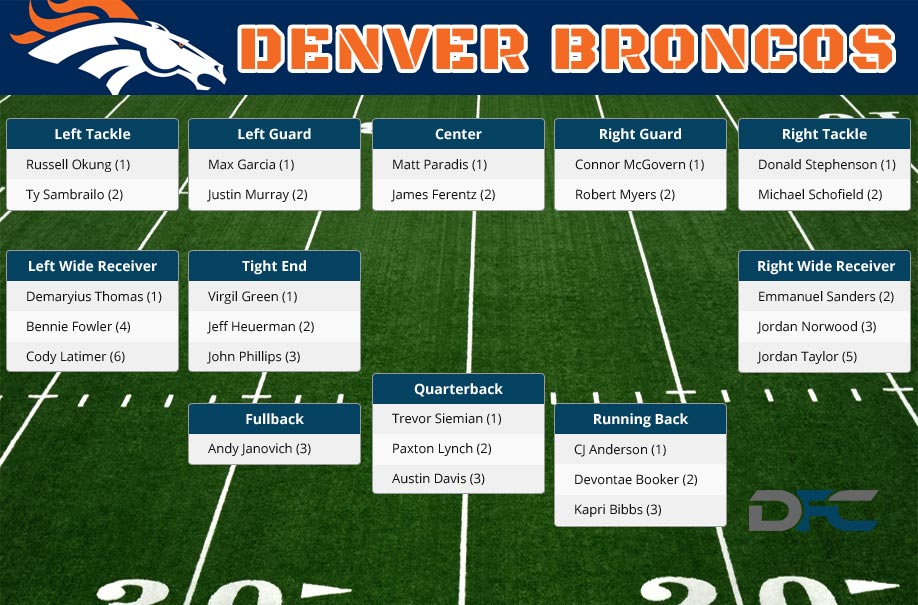 
Peyton Manning is gone, and while he leaves behind a solid offense, it's still unclear who the starting quarterback will be. The word right now is that there's a battle between Mark Sanchez and Trevor Simien for the starting role. The winner of that will land in a VERY strong fantasy situation, with two high end receiving options and a solid running game.

CJ Anderson had a very eventful offseason. First, the Broncos decided to allow him to test the restricted free agency market, where he received multiple offers. He ended up getting a solid offer from the Miami Dolphins, which the Broncos ended up matching. Anderson now has a new contract and is set up to be the featured running in the offense on both running and passing downs. Ronnie Hillman is still in town, and someone to consider when thinking about passing down snaps. However, without an injury, he should be the clear second option instead of the '1B' he was last year. Rookie Devontae Booker is a solid third running back in the depth chart, but it's unlikely he sees a significant role in year one.

Demaryius Thomas is once again the top receiver in the passing game. He brings stability and should see above 140 targets once again in 2016. Emmanuel Sanders is a close second and should be the second most targeted option in the passing game. Third year receiver Cody Latimer is heading into a big season for his career. Considering what the Broncos invested in him, they'll likely give him every opportunity possible to emerge in the passing game. Besides Sanders and Thomas, it's tough to envision a third wide receiver working his way into a significant fantasy role.

The training camp battle to watch is between Virgil Green and second year tight end Jeff Heuerman. While Green has experience on Heuerman, he hasn't been able to establish himself in a significant way in the first portion of his career, except as a blocker. If Heuerman can establish himself as a passing down specialist, there's certainly some targets that Owen Daniels and Vernon Davis left behind.