The defending American League Champions are projected to be on the cusp of finishing .500. That's a far cry from expectations of another World Series run. The lineups' formula for success last season was making contact at a high rate and being disruptive on the bases, and it looks like they're going to attempt to duplicate that this season. The rotation lost its ace, James Shields, and didn't bring in an equally capable arm. Overall, this looks like a ho-hum roster for daily baseball value.

It's difficult to hit the ball out of the park at Kauffman Stadium. Left-handed batters have a 16% more difficult time hitting dingers than in a neutral park and right-handed batters are docked 15%. Don't confuse home run suppression for run suppression, though, as lefties score runs at a 5% higher rate and righties at a 4% higher rate at Kauffman Stadium than at a neutral park. The run scoring uptick is nowhere near large enough to scare daily gamers off of a favorable pitching matchup.

Salvador Perez can hit well for his position. That's the best thing that can be said about his pitch framing. In other words, he's not helping his pitchers out with his framing skills. He played in a staggering 146 games last year, but he's reportedly going to have his workload reduced this season. Eric Kratz is far better at pitch framing and will be a welcome sight behind the dish for a few of the starters who have control issues.

Who will hit leadoff?

Alcides Escobar received 73 plate appearances hitting leadoff last year and Lorenzo Cain hit leadoff for 101 plate appearances, per FanGraphs. Both could be candidates for the leadoff job, but big free-agent signing Alex Rios looks like the best bet. He has stronger on-base skills than Escobar, who hit near the bottom of the order for the majority of his plate appearances last year, and Cain is coming off a better season than Rios making him a better fit for hitting third. Cain is a safe bet to hit in a prominent lineup spot, but the answer to this question will have big daily baseball implications for Rios and Escobar.

Will Chris Young bump someone from the rotation?

The Royals recently signed Chris Young to a one-year deal. He won the American League Comeback Player of the Year last season after pitching to the tune of a 3.65 ERA in 30 appearances (29 starts). His 5.02 FIP paints a less rosy picture of his work, but his ability to coax infield fly balls at a very high rate likely contributes to the disparity. For what it's worth, his 3.77 ERA for his career also best his FIP (4.38). Young was rocked by left-handed batters who posted a .355 wOBA last year, so if he wins a spot in the rotation, daily gamers will want to stack lefties against him. General manager Dayton Moore has expressed that Young was signed to be a reliever, but color me skeptical that the plan won't change if one of the starters ahead of him in the pecking order struggles mightily.

The lack of power in this lineup caps the ceiling on individual players. Rios had a power outage last season, but equally alarmingly he went from stealing 42 bases in 2013 to stealing 17. He's 34-years old, so a bounce back shouldn't be considered a given. He has comeback from a down year before, though.

Alex Gordon's power has been steady for three years (.160 ISO in 2012, .156 in 2013, and .165 last year). His stolen base totals haven't wavered much either, but his rebound in walk rate was a welcome sight. He's a great fit for the two-hole with his modest power, solid base running skills and ability to get on base at a high rate. Gordon will probably be a reasonably priced daily baseball option for the outfield this season.

Cain isn't your prototypical number-three hitter. His power is underwhelming, which hurts his daily baseball value, but he's a great base stealer (28 in 33 attempts last year). However, as long as he's hitting third his run production potential makes him rosterable.

Eric Hosmer's regular season numbers last season wouldn't warrant daily baseball consideration under most circumstances, his lineup spot not withstanding. He was a big-time prospect, though, and he scalded the ball in the postseason. The pedigree paired with his play on the biggest stage are reasons enough for me to suggest him as an early season GPP contrarian pick at the deep position of first base.

Kendrys Morales, Salvador Perez and Mike Moustakas could all very easily be shuffled up. Morales missed most of last season after teams decided they'd rather not forfeit a draft pick to sign him. He was dreadful when he did play, but the Royals saw enough to extend him a two-year contract. Perez is an above average hitter for a catcher, and he's an especially enticing daily baseball pick when facing a left-handed pitcher. Moustakas is the wild card of this trio. He, like Hosmer, was a high-end prospect. His struggles last year earned him a demotion to the minors at one point, but a five homer postseason showing (in 55 plate appearances) puts him back on the daily game radar. He's not patient, but he makes contact at a high rate and does possess above average power. 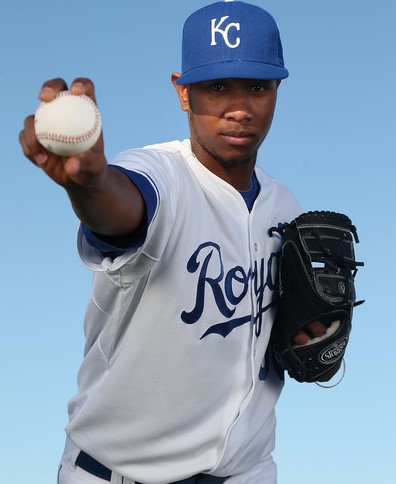 The absence of Shields has resulted in Yordano Ventura ascending to the the top of the rotation. He's not a daily baseball ace, but he's good and might strikeout more batters this year. His swinging strike rate projects favorably for more strikeouts this year, and he has the stuff to support the swing-and-miss he generated last year.

Jason Vargas is a prime example of why it's important to understand the scoring differences between daily baseball sites. He's not a big strikeout pitcher, but because he's backed by a good defense and is capable of pitching deep into games, he should record a decent ERA and be in line for wins when the matchup is favorable. What he's capable of makes him much more useful on FanDuel than on DraftKings.

Edinson Volquez posted a career best walk rate and threw to one of the better pitch framing catchers in the league last year. He sacrificed strikeouts for better control, and even then his control was still below average. It would be unwise to expect a repeat of last year's numbers, and he'll be a great target to pick hitters against.

Danny Duffy's 2.53 ERA is misleading. His 3.83 FIP might be, too. Perhaps his 4.42 xFIP last year is more indicative of what should have happened last year. Still, he has an electric arm and has recorded strikeouts at a higher rate previously in his career. Duffy will be an interesting player to monitor, but he's not one to be used early in the season.

Jeremy Guthrie is the veteran of the staff, but the best thing that can be said about him is that lefties annihilate him. They totaled a .364 wOBA against him in 2014, and the .377 wOBA he's ceded to left-handed batters is the fourth highest mark among qualified pitchers, per FanGraphs. If Guthrie beats Young for a rotation spot, load up on lefties when he's scheduled to start. Both Gutrhie and Young could be keeping the fifth spot in the rotation warm for Kris Medlen, but since he's coming off a second Tommy John surgery, it's best not to speculate on what he could do until he's fully healthy again.

Morales' late start to last year almost certainly played a hand in his awful offensive output. He'll get a full spring training in before the season, and he it's highly improbable he'll be as dreadful as he was last year. The switch-hitting designated hitter tallied a 119 wRC+ in 2012 and 2013. If he gets back to that level of play, he'll be a playable bargain option at first base.

Omar Infante's down arrow doesn't mean he's a total dud at second base. The position is lackluster in regards to offensive options, so he could be a punt play. The knock on Infante is that he's unlikely to hit second in the order this season after hitting there last year. Hitting eighth or ninth in the order will reduce the number of plate appearances he receives and hurt his run scoring chances.

The Royals offense is where daily baseball gamers will turn for matchup based value plays. There aren't stars to be found here, but that means the prices on the hitters won't rank near the top of the heap. Interestingly enough, everyone in the lineup appears to have at least the possibility of being useful in daily games.

The same can't be said of the rotation. Ventura is useful, and Vargas is, too, to a lesser extent. The rest of the starters will have a hard time proving that they justify being used. As a reminder, though, guys such as Young and Guthrie could provide daily gamers stack targets with left-handed batters.